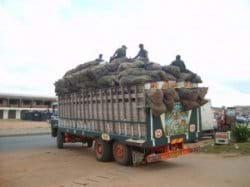 In the Wake of rampant Accidents


The Brong Ahafo regional Police Commander, DCOP Robert Ayalingo, has stated that the government should consider re-banning all articulated and heavy duty trucks from travelling at night. His comments come in the wake of constant fatal accidents that have claimed over 40 lives in the last three months on the Kintampo road in the Brong Ahafo region. Twenty-two passengers from a 207 bus and two from a DAF vehicle died in a fatal motor crash on the Kintampo road in June this year. On October 9, 16 people lost their lives in another fatal accident with 21 others sustaining severe injuries on that same stretch. The incident occurred when an articulated truck loaded with beans heading towards northern Ghana, veered off its lane and collided with an onrushing O. A. passenger bus. Speaking on the Citi Breakfast Show with host Bernard Avle, on Monday, DCOP Ayalingo stated that majority of the fatal accidents on the Kintampo road happen at night, hence his plea for government to re-introduce the ban on heavy duty vehicles from travelling at night. According to DCOP Ayalingo, the country recorded fewer fatal accidents involving long trucks when the law was introduced in February this year, but since the ban was lifted, the country especially, the Kintampo road has recorded more fatal accidents. He added that due to the poor nature of roads coupled with the poor visibility at night the ban would minimise fatal accidents on the accident prone Kintampo road. “I am appealing to the government to re-introduce the legislative instrument that bans long vehicles from travelling in the night. If that thing is enforced it doesn’t stop free movement, it only ensures safety,” he observed. However, Mr Rudolph Beckley, deputy Director of Research, Monitoring and Evaluation at the National Road Safety Commission, noted that though the suggestion is a welcome call, banning articulated trucks at night would significantly affect the flow of traffic during the day. He noted that sustainable measures must instead be put in place to regulate the movement of heavy duty trucks at night. He added that a regulation plan has been submitted to Parliament, which when passed would strictly regulate the movement of heavy trucks at night.