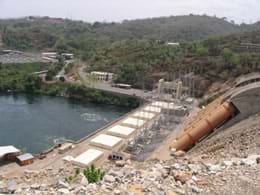 
The Chief Executive Officer of the Volta River Authority (VRA), Mr. Kweku Awotw Andoh, has announced that spillage of water from the Akosombo Dam due to the unusual rate of inflows into the dam, will not be carried out until further notice. Speaking at a press conference in Accra on Wednesday October 20, he said the VRA is closely monitoring the situation and will give a 5-day notice to communities around the Volta Lake before any spillage is carried out. According to the CEO, 16 communities up stream of the Akosombo dam and 6 communities downstream of the dam are likely to experience some flooding as a result of the unusual rate of inflows into the dam. He said though the maximum head water level of the dam is 278 ft, the VRA is still cautious about the present rate of inflows into the dam which has raised the head water level of the dam to 275.15 ft as at Wednesday October 20, 2010