Africa Needs Leaders Who Will Abide By Constitutions | Kufuor 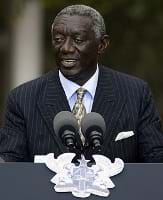 
Former President John Agyekum Kufuor has called for a new leadership in Africa that would adopt pragmatic measures in finding solutions to problems that face the continent and ensure the well being of the people. "The days when we stuck to stringent ideological models are gone. Now, we need leaders who will adopt policies that best serve the interests of their people and not because they are of the left or of the right. After all, in today's world everybody is moving to the centre, therefore there is need for pragmatism in the way we approach our development issues," he stated. Spokesperson for the former President, Mr Frank Agyekum, said in a statement that he was contributing to a panel discussion at the launch of the Thabo Mbeki Foundation at the Convention Hall in Johannesburg. The panel which discussed: "Africa's Renaissance - Dream or Reality" included former President Joaquim Chissano of Mozambiqu, former Italian Prime Minister Romano Prodi, and Dr Mamphele Ramphele of the Univeristy of South Africa. Former President Kufuor said the idea of African Renaissance was not a new one as Africans had at various stages tried to reassert themselves with varying degrees of success, adding that there should be no timelines set for its achievement as that could lead to frustrations. "The Renaissance should be seen as a process and not an event that should be bounded in time. There have been different stages of the Renaissance with the attainment of independence being a defining moment." President Kufuor said although the hopes and aspirations that came with independence had not been fully achieved, Africa must continue to forge ahead to make its voice heard in world affairs and ensure that the best accrues to the continent. He called for a new leadership in Africa that will be constitutionally minded and be responsive to the needs of the people. "The days when leaders on the continent fled their countries because they refused to heed the call of their people should be things of the past. Today we need leaders who will abide by the constitutions of their countries and remain in their countries to help in the development effort after they leave office." President Kufuor praised President Mbeki for establishing the Foundation whose aims include: 'training and developing African cadres who would dedicate themselves to the implementation of the African agenda in all its manifestations.' The Foundation has established the Thabo Mbeki African Leadership Institute in partnership with the University of South Africa to help train leadership on the continent as well as rebuilding of African institutions in politics, commerce, trade, culture and investment, among others. Former President Kufuor said similar foundations being developed by some former leaders on the continent showed that there was a dawn of new leadership in Africa. A pre-launch dinner attended by about 750 guests at the Convention Centre, saw a televised speech by former South African President Nelson Mandela, who commended President Mbeki for his initiative and called for solidarity among African leaders to ensure the good of the continent