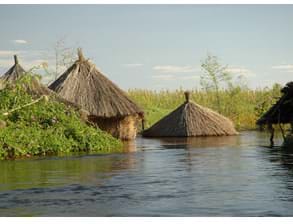 
One person is reported dead while 20 houses have submerged in Yagbon and Attributo communities of Damongo in West Gonja District of northern region. Four more houses have been flooded in Daboya Township as efforts are been made to relocate people on lowland areas in the district to prevent more disasters. This is as a result of the continuous heavy downpour and spills from the Bagre and Kampianga dams in neighboring Burkina Faso. The Damongo District Assembly has provided temporary accommodation for victims numbering about 45 at a nearby community in Damongo Township called Bungalows. Hon. Adam Mutawakil, District Chief Executive for the area who was on the ground assessing the situation confirmed the tragedy and said members of the District Security Committee are holding an emergency meeting. He appealed for donor support to alleviate the plight of the victims while efforts are been made to prevent the loss of more lives. Seventeen people have already lost their lives to the floods in the Northern, Upper East and Upper West Regions.