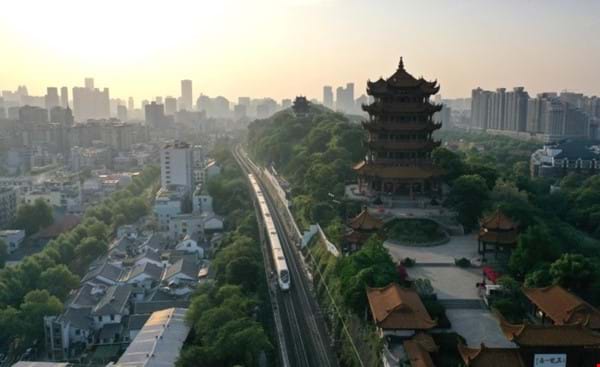 On April 16, 2020, a train of high-speed trains passed by the Yellow Crane Tower in Wuhan. Photo: Zhou Guoqiang from People’s Daily Online

Liu Yuanli, head of the school of public health in Peking Union Medical College revealed the data during a live-streaming seminar at Tsinghua University on Saturday, April 25.

If the lockdown wasn’t imposed on that day, then the next day would have seen the peak of population flow for Chinese family reunions at Spring Festival, Liu said.

The Wuhan lockdown sent a “very clear signal” about the upcoming epidemic and won “much time” for the world, Yang Zhanqiu, deputy director of the pathogen biology department at Wuhan University, told the Global Times on Sunday, April 26.

China’s stringent measures significantly slowed the global spread of the virus and earned a window period for the world.

Rather than thanking China for reporting the virus and taking such decisive measures to contain the virus spread, some outside China are surprisingly trying to blame China for concealing the epidemic and hyping Wuhan is the virus origin, which is absurd and unreasonable, Yang said.

Wuhan sacrificed itself by locking the city and asking millions of residents to stay at home in a timely manner when facing the COVID-19 epidemic, which is a common enemy of the mankind. How come people are still trying to take China as a scapegoat for the pandemic, experts said.

The study offered strong evidence of how much Wuhan lockdown is essential for the worldwide pandemic, however, miscommunication and underestimation were repeated not only in Europe but also in the US, where governments and officials failed to prevent infections from exploding in their countries, Chinese experts noted.

“Closure of a city in the fight against epidemics has never happened not only in China, but such a large-scale city lockdown has never happened in the history of the world epidemic prevention,” said Liu, of Peking Union Medical College at the live-streaming event on Saturday.

Wuhan was locked at just the right time. “The lockdown sent a signal to the whole country that the overall battle against the epidemic was starting,” Liu said.

There were more than 400 confirmed cases on January 22 in Wuhan and on the next day on January 23, Wuhan adopted strict measures to restrict people from leaving the city.

It later proved that the week after January 23 was a crucial week, Liu noted.

If the city was closed one day or one week later, the impact of the epidemic would be “huge,” Liu said.

“Facts also proved,” Liu said, that 63 percent of that more than 80,000 cases diagnosed nationwide were in Wuhan.

The Wuhan lockdown was not simply a restriction on traffic but an overall anti-epidemic policy for a city: medical treatment for patients, community closed-loop management, mass screening and quarantine of residents, Liu noted.

Antibody blocks infection by the SARS-CoV-2 in cells, scientists discover 194