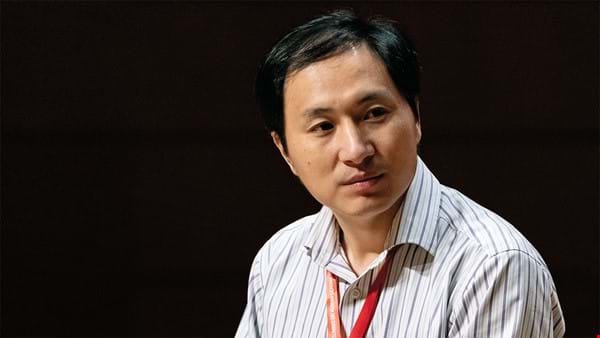 He Jiankui, at a Hong Kong meeting in November 2018 where he presented his work, has not been seen in public since then. ANTHONY KWAN/BLOOMBERG/GETTY IMAGES


He Jiankui, the Chinese researcher who stunned the world last year by announcing he had helped produce genetically edited babies, has been found guilty of conducting “illegal medical practices” and sentenced to 3 years in prison.

A court in Shenzhen found that He and two collaborators forged ethical review documents and misled doctors into unknowingly implanting gene-edited embryos into two women, according to Xinhua, China’s state-run press agency. One mother gave birth to twin girls in November 2018; it has not been made clear when the third baby was born. The court ruled that the three defendants had deliberately violated national regulations on biomedical research and medical ethics, and rashly applied gene-editing technology to human reproductive medicine.

All three pleaded guilty, according to Xinhua. The court also fined He, formerly of the Southern University of Science and Technology (SUSTech) and known as JK to friends and colleagues, 3 million Chinese yuan ($429,000). His collaborators were identified as Zhang Renli, of a medical institution in Guangdong province, and Qin Jinzhou, from a Shenzhen medical institution; Zhang received a 2-year prison sentence and was fined 1 million yuan, according to Xinhua, whereas Qin was given 18 months in prison with a 2-year reprieve, and a 500,000 yuan fine.

The court heard the case in private to protect the personal privacy of the individuals involved, Xinhua said. The report says physical and documentary evidence and witness and expert testimony were presented to the court, but it gave no details.

"Sad story—everyone lost in this (JK, his family, his colleagues, and his country), but the one gain is that the world is awakened to the seriousness of our advancing genetic technologies. I feel sorry for JK’s little family though—I warned him things could end this way, but it was just too late," wrote bioethicist William Hurlbut at Stanford University, whom He consulted on the embryo-editing experiment.

In November 2018, He announced that he had modified a key gene in a number of human embryos in a way thought to confer resistance to HIV. The modification might be passed on to the descendants of children born with it. He recruited couples in which the father was infected with HIV and the mother was not. In a talk at the International Summit on Human Genome Editing in Hong Kong, China, He said he wanted to spare the babies the possibility of becoming infected with HIV later in life. The technique could be used to reduce the HIV/AIDS disease burden in much of Africa, he argued, where those infected often face severe discrimination.

The announcement touched off a firestorm of criticism from scientists and ethicists in attendance at the summit and around the world. Experts agree there are safer and more effective ways to prevent HIV infections, and the experiment was deemed premature, irresponsible, and unjustified because it exposed the babies to risks associated with gene editing for little, if any, benefit.

Guandong province, which Shenzhen is part of, conducted an investigation that concluded: “He had defied government bans and conducted the research in the pursuit of personal fame and gain.” But details of the investigation, including who conducted it, were never publicly released. Instead, the results were publicized in January 2019 by Xinhua. SUSTech dismissed He at that time. The Chinese government later tightened regulations covering human genome editing. He has not been seen in public since his presentation at the Hong Kong conference.

But many key questions surrounding his activities remain and scientists are hoping more information will be forthcoming. “We had been wondering what had happened to He Jiankui; there has been little if any news on his whereabouts or the progress of any investigation being conducted by the Chinese authorities, or of other details surrounding what he had done, for many months,” Robin Lovell-Badge, a stem cell biologist at the Francis Crick Institute, said in a statement distributed by the United Kingdom’s Science Media Centre. “In that sense alone, the information now released is reassuring,” he added. Lovell-Badge said he cannot comment on the severity of the sentence, “but both prison and a fine would have been the likely penalties if someone had done what [He] did in the U.K.”

"The field of gene editing will carry the hashtag #CRISPRbabies in the mind of the public for a period longer than He's sentence, and that is an additional crime he committed but was not formally charged with," says Fyodor Urnov, a CRISPR researcher at University of California, Berkeley. "I hope that this stain will soon diminish relative to the positive impact that gene editing is likely to have in ethically treating existing disease. Moving forward, the real threat of severe legal action is the right deterrent for future Herostratus-like individuals whose hubris could drive them to follow in He's footsteps.”

Lovell-Badge hopes all three babies are happy and healthy and says they deserve privacy. But, “There are still many details of the case that have yet to be released,” he says. These include confirmation of the edits made to the target gene and whether the editing affected other parts of the genome, among other technical issues. There is also the question of how He “could have proceeded with what he did with so much secrecy.”

Hurlbut also questions the rogue scientist narrative. "He [Jiankui] may have broken laws. I don’t know that. It seems like the court case wasn’t transparent to the world, which it should have been. … It can’t just be three people involved. … It really is hanging someone out to dry when he was being encouraged and cooperative with the spirit of his society."

With reporting by Jon Cohen