We cannot match NDC in erection of giant billboards - NPP 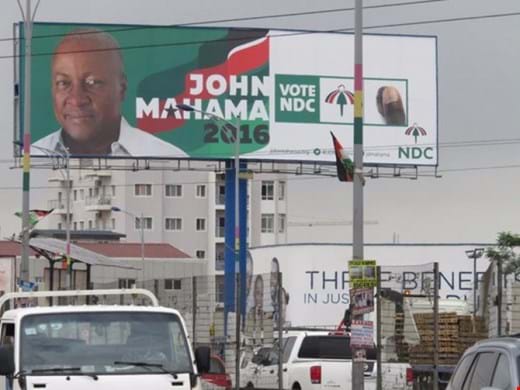 Greater Accra Regional Chairman for the opposition New Patriotic Party(NPP), Ishmael Ashitey has stated that, Nana Addo Dankwa-Akufo, presidential candidate of the elephant family is more visible than his contender, President Mahama despite the unavailability of campaign billboards from their side. Speaking to Rainbow Radio's Kwabena Agyapong on Frontline, Ishmael Ashitey noted that, the party is not  worried at the giant billboards the incumbent National Democratic Congress (NDC), is splashing within the region. According to him, the NPP did much better when in power than the NDC. He explained that comparing the achievements of the NDC with the resources available and the achievements of the NPP, one can conclude that, the party is best to manage Ghana. An optimistic Ashitey told the host that the NPP will win the Greater Accra region with a wide margin. The change is coming message he posited, is going well and voters are elated and have expressed their willingness to vote Nana Addo come December 7, 2016, he added. Mr. Ashitey stressing on the visibility of Nana Addo, he said, if billboards are the decider for this year's election, then the NPP would come nowhere near a win hence, they unperturbed with the giant billboards of the president springing up. He said, the NDC are erecting these billboards because they are sitting on the wealth of this nation, so they will do what they want, he fumed.

''The NPP should forget about the election if billboards decides who should win an election, because these people are sitting on the wealth of the state, they will do whatever they want. Look all these giant billboards. I don't even know their cost. If we can value the billboards they have splashed in the Greater Accra Region, then you will be wondering why they say they will not pay teacher training allowance, and contractors; but they get money to erect giant billboards. So if you are talking about billboards; we cannot match them when it comes to the erection of billboards, but we know our message is going down well with the people. Billboards don't win an election, it is the message. And our message is solid,'' he stressed. The tour of the region he revealed has been suspended till Friday due to a national executive and council meeting today on Thursday.