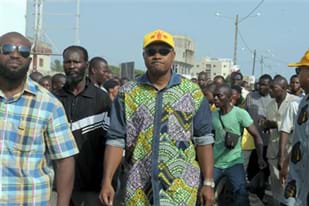 Togo moves to block poll protest Website
Togo's government has moved to block a planned rally by opposition parties to protest against the result of the country's presidential election, won by Faure Gnassingbe, the incumbent president. Tensions have run high in the West African state in the wake of the elections, with the opposition announcing it would hold demonstrations on Tuesday. But police have moved to prevent opposition protests, temporarily sealing off the alleys leading to the headquarters of the opposition. "Demonstrations on the public street cannot be organised on working days, because they interrupt activities," Pascal Bodjoma, a government spokesman, was quoted by the AFP news agency as saying. Traffic disrupted Jean-Pierre Fabre, the country's opposition leader, who was stranded outside his party headquarters for more than an hour, claimed that security forces were provoking his supporters. "They are trying to provoke our young people, and then they are going to throw grenades at them. You see? "This is what they have been doing for the past three days,'' Fabre said, before the standoff with police came to an end. Colonel Damehane Yark, a spokesman for a special election commando unit, said the roads leading to the party's office were being blocked to prevent opposition supporters from marching and disrupting traffic on the main boulevards. An opposition demonstration had blocked the main road on Sunday, before being broken up when security forces fired tear gas. Election dispute The ratcheting up of tensions is being closely watched as after Togo's presidential election in 2005 hundreds of people were killed in post-election violence, though elections two years later were peaceful. Fabre, who heads the opposition Union of Forces for Change (UFC), vowed his supporters would take to the streets following the election results. Togo's election commission said Fabre had won only about 34 per cent of the vote, while Gnassingbe had won 1.2 million of the two million votes cast, or over 60 per cent. Fabre announced his party had proof the ruling party rigged the election in several ways, including intimidating opposition supporters and buying off other voters and vowed to present evidence in court. But international observers said the poll had gone smoothly, thought the European Union's observation mission did say there was evidence the ruling party may have tried to buy off voters by handing out rice to the poor. The EU report did not mention evidence of ballot stuffing or vote rigging, as alleged by the opposition. Gnassingbe, first took the presidency in 2002, after 38 years of authoritarian rule under Gnassingbe Eyadema, his father.