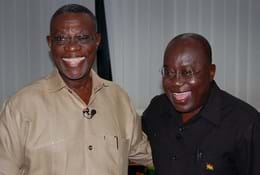 
Synovate Ghana, opinion pollsters have once again released poll results that still has opposition New Patriotic Party flagbearer Nana Addo Dankwa Akufo-Addo leading President John Mills by five percentage points. The media researchers/pollsters, formerly Steadman Group, said if elections were held in May, president Mills would lose. The opinion poll, the second in two months, said if elections were held in May, Nana Akufo-Addo would maintain his 43 percent which he obtained in the April poll ahead of President Mills who lost three percentage points since April’s opinion poll by the same research body. In the May poll results, the president garnered 38 percent, a drop from his April figure of 41 per cent. The Convention People's Party(CPP) presidential candidate for the 2008 elections, Dr Papa Kwesi Nduom, fell from his previous eight percent to seven. People's National Convention (PNC) candidate Dr Edward Nasigre Mahama appreciated by two percentage points from April’s two percent to four percent. In the latest opinion polls, six percent of the 2,000 people sampled said they would not vote. One percent said their vote is a secret and another one percent said they didn’t know who they would vote for if elections were held in May. The latest poll also reveals Nana Akufo-Addo will win all the swing regions except President Mills' home of the Central Region, which is a reversal of April results. In that results, Nana Addo obtained 52 per cent in the president’s home region, while president Mills garnered 32 per cent. Asked who they thought would emerge flagbearer of the ruling NDC, 70 percent of the respondents chose Prof Mills, 16 percent said Nana Konadu and 14 percent said they didn’t know.

We Will Be Fair To All Contestant NDC 417