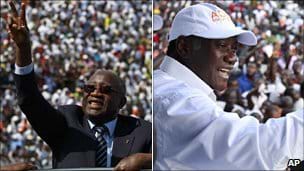 International Affairs Expert at the Legon Centre for International Affairs, University of Ghana, Dr Vladimir Antwi-Danso is warning of an impending strife in neighbouring Ivory Coast over a disagreement on who won that country’s presidential poll. The country’s Constitutional council overturned results announced by the Independent Electoral Commission which declared Opposition Leader Alassane Ouattara the winner. Laurent Gbagbo and opposition candidate Alassane Ouattara have both sworn themselves in after claiming victory in a presidential run-off. Moments after Mr Ouattara was himself sworn in at an Abidjan hotel guarded by UN peacekeepers, he immediately re-appointed Guillaume Soro as his prime minister. Mr Soro had tendered his resignation in Mr Gbagbo's administration just hours earlier. The US, UN Security Council, France and ECOWAS have all called on Mr Gbagbo to step down. Ivory Coast is strongly divided on ethnic, cultural, religious and administrative lines between the North and South. The two candidates represent the two sides of the north-south divide with the northern half still controlled in part by the former rebels. Dr Antwi-Danso told Citi FM the current impasse could easily plunge Ivory Coast into chaos. “Once this situation has arisen, the tribal elements will be brought to the fore. The north from Korhogo all the way to Bouake are not going to sit down. And I can believe that very soon we are going to hear worst th9ings. The United Nations Security Council met on Friday and they have given their support to the Electoral Commission and once they have given their support, and Britain and France are warning, then we have a big problem at hand. One Gbagbo has been sworn in; Ivory Coast is going to be isolated. And as much as they are isolated, then anything can happen because when people know that your government is isolated, they take the law into their own hands because there is no government” he said. Four persons have already died following unrest after the poll.