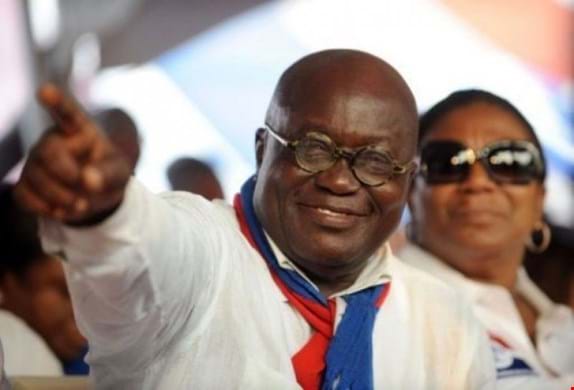 The Electoral Commission (EC), has declared the New Patriotic Party (NPP) Presidential Candidate, Nana Akufo-Addo, the winner of the 2016 elections.

The NPP Flagbearer finally secured the presidency after the third time of asking, beating the incumbent, President John Mahama.

Nana Akufo-Addo rode on the back 53.85 percent of the valid votes cast to become Ghana’s fifth president under the fourth Republic. President Mahama, who ran on the ticket of the governing National Democratic Congress (NDC), secured 44.40 of valid votes cast. President Mahama’s defeat makes him the first incumbent to lose an election since Ghana returned to multi-party democracy in 1992.

The NPP Flagbearer had already acknowledged the concession of five of six other contenders some 48 hours to the official declaration of results by the EC. The candidates of the People’s National Convention (PNC), Dr. Edward Mahama, the National Democratic Party (NDP), Nana Konadu Agyeman-Rawlings, the Progressive People’s Party (PPP), Dr. Papa Kwesi Nduom and the independent candidate, Jacob Osei Yeboah, all called him to concede the election.

These five candidates all secured 1.76 percent of votes cast. 15, 712, 499 persons were registered to vote in this election across 28, 992 polling stations across the 275 constituencies.

He is the second candidate to have won the presidency after contesting for the third time. The late President John Atta Mills also won the seat on the third ask. Nana Akufo-Addo comes from a rich political heritage with three of the iconic Big Six, the founding fathers of Ghana, being his relatives.

They were J. B. Danquah, his grand-uncle; William Ofori-Atta, his uncle and Edward Akufo-Addo, the third Chief Justice of Ghana and later the ceremonial President of the Republic from 1969 to 1972 as his father.

Nana Akufo-Addo himself, aged 72, has already served Ghana as the Attorney General and then as Foreign Minister in the John Kufuor-led NPP government from 2000 to 2008.

Unlike the 2012 election campaign where the Nana Akufo-Addo and his party campaigned on a platform of educational reform with the free SHS promise, the Nana Akufo-Addo’s campaign for the presidency was on the back of a promise address unemployment and job creation with the NPP’s 2016 manifesto themed “Change: An agenda for jobs”. -