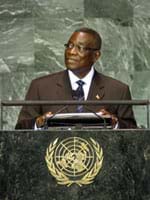 
At a time world leaders are racing to New York to attend the 26th session of the United Nations (UN) General Assembly meeting, Ghana’s President, John Evans Atta Mills is busily touring China under the pretext of attracting investments and building stronger ties between the two nations. He arrived in Beijing on Sunday evening to start a six-day state/working visit to that country. Communications Director at the Presidency, Koku Anyidoho yesterday confirmed fears and speculations that the President may after all not attend the meeting where he was expected to deliver a speech on poverty, hunger and disease and interact with world leaders. The three-day summit which started yesterday is, among other things, scheduled to discuss and review the progress of member countries in the fight against extreme poverty, hunger and disease under the much-talked-about Millennium Development Goals (MDGs). Experts say Ghana would not be able to achieve all the goals within the stipulated time frame. However, UN Secretary General Ban Kim Moon has renewed calls on world leaders to show strong will in addressing the issue. At the forum, world leaders are expected to commit themselves to an action plan to achieve eight poverty reduction goals by a 2015 target date. This is probably the first time in the history of Ghana that a sitting president or his vice would miss such a forum, as Vice President John Dramani Mahama has been ‘benched’. The failure of the president and his vice to attend the meeting has resulted in a situation where Foreign Minister Alhaji Mohammad Mumuni is leading a ‘lame’ government delegation to the meeting. DAILY GUIDE has however learnt from sources that President Mills’ host and Chinese President, Hu Jintao would leave him in China to attend the UN meeting. President Mills would therefore be left in the hands of Chinese Ministers who would take him round the country. At a time his colleagues were seriously finding lasting solutions to the challenges confronting the world, President Mills was laying wreaths on Monday at the Tiananmen Square where over 3,000 intellectuals and student activists were cruelly gunned down by the Chinese Communist government in 1989. Later, President Mills and his Chinese counterpart, Hu Jintao signed a deal for China to give Ghana a loan of $3billion to develop its energy sector. Specific areas to be targeted under the deal include infrastructure development, job creation and the development and other derivatives of oil and gas, all in the name of preparing the Chinese to take over of Ghana’s oil. The package, which would be disbursed through the China Development Bank (CDB), constitutes the first phase of Chinese assistance which would start rolling out in the next six months after the Government of Ghana has devised a framework for the package. The deal was announced after closed-door bilateral talks between President Mills and the Chinese President held at the Great Hall of the People in Beijing, on the second day of President Mills’ visit. In addition to the $3billion-package, China would also give Ghana preferential buyers’ credit of $260 million for the expansion of the Kpong Water Works project and another loan of $150 million for Ghana’s e-governance project. President Mills is also expected to sign a number of protocol and bilateral agreements with the Chinese government to secure funding for various sectors of the Ghanaian economy including health and transport sectors. President Mills is expected back home in Ghana on Saturday to prepare for another state visit to Tokyo, Japan while he keeps the United Nations and America at arms length.