Kufuor To Ask Jumah To Step Down For Pat? 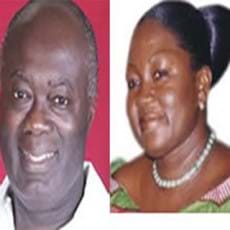 There are credible indications that the New Patriotic Party (NPP) Member of Parliament (MP) for Asokwa, Mr. Maxwell Kofi Jumah, would be asked to step down from contesting the party's primary in Asokwa, according to the Daily Dispatch newspaper. The paper said this is likely to be seen as an act of penance towards Ms. Patricia Appiagyei. Readers will recall that Mr. Jumah alleged that Madam Appiagyei, who succeeded him as the Mayor of Kumasi, used sexual favours to enable her be appointed to that position. Ms. Appiagyei is reported to be getting ready to contest Mr. Jumah at the Asokwa primary to elect the party's 2012 parliamentary candidate. Daily Dispatch’s sources close to ex-President John Agyekum Kufuor have hinted that the only way he (the ex-president) can be appeased is for Mr. Jumah to step down from contesting the Asokwa primary, in favour of Ms. Appiagyei, popularly known as Mama Pat. The sources hinted that in fact, ex-president Kufuor is likely to make that request to Mr. Jumah. There have been credible reports that ex-President Kufuor has been angered by Mr. Jumah's allegation since he made the appointment. Meanwhile, Ms. Appiagyei, 53, has said as a Christian, she has forgiven Mr. Jumah, 60, for his comments.