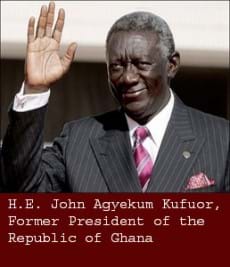 Former President John Agyekum Kufuor has returned home from New York where he attended side meetings of the 68th General Assembly of the United Nations. The Former President, in his capacity as Chairman of the UN-affiliated Sanitation and Water for All (SWA), held stakeholder meetings on Water, Sanitation, Hygiene (WASH) and Nutrition. Mrs. Ellen Johnson Sirleaf, President of Liberia, Mr. Jan Eliasson, Deputy General-Secretary of the United Nations and Mr. Paul Polman, Chief Executive Officer of Unilever International, among others attended the meeting.

A statement signed by President Kufuor's spokesperson, Mr Frank Agyekum, said among the bilateral partners at the meeting was Mr. Rob Swartbol, Director-General for International Cooperation of the Netherlands who announced an increase of one billion dollars in his country’s budget towards meeting the goals of WASH and Nutrition. The meeting noted that “water is life and sanitation is dignity’ and urged governments to increase funding in these areas for the benefit of humanity.”

Former President Kufuor was a participant at a High Level Forum of the UN Foundation on: “‘Accelerating Action and Partnering for Impact” which brought together leaders from across sectors to deliberate on challenges facing the attainment of the UN Millennium Development Goals. As Special Envoy of the Global Network for Neglected Tropical Diseases (NTDs), Former President Kufuor chaired a meeting on: “Innovate and Integrate: Multi-sectoral Approaches for Eliminating Intestinal Worms in Children.”

The meeting sought to create awareness about the burden intestinal worms place on more than 800 million children around the world and sought new ways to eradicate them in the post-2015 MDGs era. Former President Kufuor also held bi-lateral meetings with UN Deputy Secretary-General Mr. Jan Elliason and called on President John Dramani Mahama.