I Can Bring The Better Ghana-Akufo-Addo 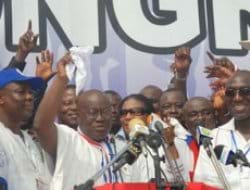 The flagbearer of the opposition New Patriotic Party (NPP), Nana Addo Dankwa Akufo-Addo, has stated that it is only by electing him as president that Ghanaians will truly experience the 'Better Ghana' that they were promised by the President Evans Atta Mills administration. Addressing the Kwame Nkrumah University of Science and Technology branch of the NPP, Nana Akufo-Addo noted that the NPP is the only party in the country that can make the much desired transformation a reality. He added that the world has no time for visionless and unimaginative leaders and needs leaders who can think and act big to bring development in a country hence his plea for him to be elected as president. The former foreign affairs minister urged the party’s youth to do everything within their power to help bring the party back to power in 2012 to ultimately rescue Ghanaians from the hardship brought upon them by the ruling NDC. According to Akufo-Addo, the NPP is the only party that is capable of providing infrastructural development and providing jobs for the many unemployed in the country. “The world was never built by people of little vision and little imagination, the world belongs to those who can think big, act big and do big things and for that to happen the only political force in our country that can bring about this transformation and change is the New Patriotic Party. "There is no other party that can do it. At all cost we should win the election of 2012,” he declared.