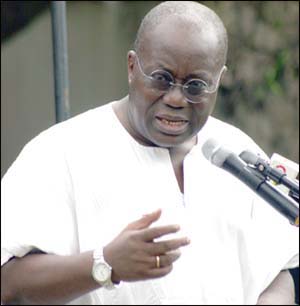 
The New Patriotic Party presidential aspirant for the 2012 General Election Nana Akufo-Addo has taken a swipe at the Mills’ administration describing it as tenure of incompetence and lawlessness. Addressing journalists and hundreds of party supporters on Wednesday to kick-start his nationwide campaign ahead of the party’s primaries on August 07, 2010, Nana Addo said the maladministration of the NDC government has eroded the investor confidence and huge economic gains chalked by the NPP before leaving power. He said the country is now “moving backwards slowly but surely,” in apparent retaliation to President Mills who said he was performing and achieving results slowly but surely. Quoting copiously figures from a World Bank report, Nana Addo posited that that 7.4 million Ghanaians were under the poverty line in 1992 when the population was only 15.4 million. In 1999, one year before the Rawlings led NDC government left power 7.2 million Ghanaians were still under the poverty line with a population well over 18 million. According to him, in 2006, five years into the administration of the NPP, poverty was greatly reduced as a result of an effective economic management and solid social interventions. The total number of Ghanaians still under the poverty line was thus reduced to 6.3 million, he quoted. With the assumption of office by the NDC, Nana Addo said (quoting estimates of the World Bank report) half a million more Ghanaians are predicted to fall back to the poverty line due to the poor economic policies of the government. “Incomes have fallen in just one year of a better Ghana,” he said, adding with the economy shrinking at a faster rate the government cannot claim to be “creating jobs, except 1.6 million phantom ones.” Nana Addo further castigated the credential of the president who is widely touted as “Asomdwee Hene”- King of Peace, saying under the Asomdwee Hene, peace in the country is eroding. He said the 16 month administration of the NDC is characterized by “incompetence, lies, hypocrisy, and lawlessness,” adding “law and order has broken down under the era of Asomdwee Hene-King of Peace. He is under no illusion that he is the right candidate to redeem the party and country from the “maladministration of the NDC”. He pledged a “bold and decisive government, sincere and not condescending...A government that sees evil, hears evil and acts against evil”, he said. He was hopeful he would be voted back as the flagbearer of the party, acknowledging a groundswell of support he claims to have garnered. He said the motivation that led him to fight against the union government of the Acheampong in 1978 and the PNDC government is the same motivation urging him on to regain power from the NDC government. He called for unity within the party and implored his followers to run a clean campaign devoid of insult and character assassination. He will start his nation wide campaign on Thursday in Cape Coast, “that is where we lost the election and that is where we are going to win,” he declared. Nana Addo also, at his media launch, received massive support from the party's big shots and majority of his colleagues who competed with him during the party’s presidential primary in 2007. They include Kennedy Adjapong, Yaw Osafo Marfo, Dr. Kwame Addo Kufuor, Dr. Kofi Konadu Apraku, Dan Botwe, Oboshie Sai Cofie and Mike Ocquaye. The rest include Sheikh I.C. Quaye, Harouna Esseku, Kan Dapaah, Lord Commey, Kwamena Bartels, Nana Kofi Koomson, Madam Ayorkor Botchwey, Christine Churcher and Nyaho Nyaho Tamakloe.