Ghana goes to the polls today for a presidential election 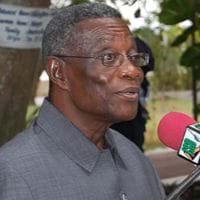 Ghana Goes To The Polls

Ghana goes to the polls today for a presidential election Website
ACCRA, Ghana | Political scientists use a simple test to determine whether a country has a mature democracy: Has it had two successful handovers of power from one legitimately elected leader to another? Analysts and investors have their eyes trained on Ghana, whose 23 million people are expected to join the ranks of the world’s stable democracies when they go to the polls today to elect their next president. Unlike its neighbors whose rulers came to power in coups and never ceded control, Ghana suffered back-to-back coups in the 1970s and 1980s but then took a turn. After ruling for 11 years, ex-strongman Jerry Rawlings organized elections. He won two terms, then surprised the world by ceding power when his party’s candidate lost to rival John Kufuor in the 2000 vote. It’s now President John Kufuor’s turn to do so after two terms in office, and analysts expect he will abide by term limits and step aside without a fuss, marking the second successful handover, a milestone not just for the country but also for Africa as a whole. Today’s election pits the ruling New Patriotic Party’s Nana Akufo-Addo against seven opposition candidates. Akufo-Addo’s main challenge comes from John Atta Mills, the candidate of Rawlings’ National Democratic Congress. “Moving around the continent, you can come up with — maybe — a handful of nations that have pulled this off,” said Africa expert Peter Pham, director of the Nelson Institute for International and Public Affairs at James Madison University. “That’s why this election is so significant.” The nations that have met the litmus test are few and include Benin, which in 1991 was the first African nation to transfer power from a dictatorship to a democracy. Recent setbacks include Mauritania, which held its first democratic elections in more than 40 years last year and saw those gains reversed in a coup 1½ years later. Catastrophic failures include Kenya and Zimbabwe, both of whose leaders refused to relinquish control after recent elections, causing their countries to descend into violence. In Ghana’s capital, voters are keenly aware of the responsibility they bear. “We have an image to protect,” said Sylvia Annoh, spokeswoman for the country’s electoral commission. “We are an example for Africa,” she said, adding that not only was Ghana the first African country to declare independence in 1957, it is now poised to become a model for the region. Voters are also acutely aware of the stakes. With an annual growth rate topping 6 percent, the country is one of the continent’s few economic success stories. However, there is a stark standard of living gap that has fueled the country’s opposition, which argues that wealth has failed to trickle down. Still, over the past four years, foreign investment has grown over twenty-fold, from around $100 million in 2004 to $2.6 billion this year, according to Rosa Whitaker, a former assistant U.S. trade representative for Africa who now advises the government. “When people ask me why I am so confident this election will go smoothly, I say because people have something to lose,” she said. Even more so following the discovery last year of offshore oil reserves. The revenue from the discovery is expected to pump an extra $2 billion to $3 billion a year into the state purse.