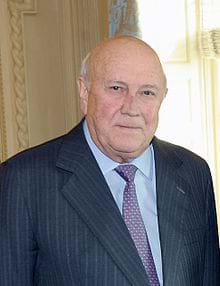 Mr Frederik Willem de-Klerk, former South African President, on Tuesday applauded Nana Akufo-Addo, the 2012 Presidential Candidate of the New Patriotic Party (NPP) for the show of maturity after the Supreme Court’s verdict. He said although Nana had reservations about the judgment on the election petition, he accepted it for the peace of the country. Mr de-Klerk made the statement when he called on Nana Akufo-Addo at his Nima residence in Accra. Mr de-Klerk, a representative of the Global Leadership Foundation (GLF), is in the country as a guest of the Institute of Economic Affairs (IEA). He said Nana’s acceptance of the verdict without seeking a review showed his respect for the law and love for peace. He charged other African countries to learn from Ghana's conduct after the court’s ruling and called on the Electoral Commission (EC) to implement the various recommendations made by the Justices of the Supreme Court. Mr de-Klerk said he was confident the reforms to be introduced by the EC would go a long way to address the problems identified by the Court.

Nana Akufo-Addo, in welcoming Mr de-Klerk, said that he was humbled by the visit and pledged his commitment to continue educating his supporters to maintain the peace of the country. He said NPP as a party was rooted in the rule of law and would do nothing to disturb country’s democratic dispensation, adding that what was paramount to him was the growth of the NPP and the country in general.

Meanwhile, a delegation of queen mothers from various traditional areas in the country had called on Nana Akufo-Addo and commended him for accepting the Supreme Court’s verdict. Another delegation composing the Central Regional Executives of the NPP, paid a courtesy call on Nana Akufo-Addo and pledged their support for him if he decides to seek a third chance to lead the NPP to the 2016 presidential poll.