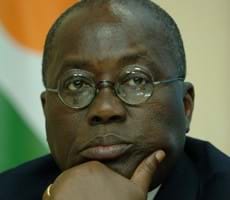 The Presidential candidate of the opposition New Patriotic Party (NPP), Nana Akufo- Addo has finally broken his silence on his meeting with Prime MInister David Cameron over the latter's threat to cut aid to countries that do not have regard for minority rights including gay rights. Nana Addo’s is captured on a tape recording intercepted by Adom FM at a briefing to the Ghanaian community in United Kingdom (UK) after the meeting with David Cameron. Nana Addo described David Cameron’s statement as unfortunate which he said Ghanaians are not pleased with. There have agitations over Nana Addo’s silence on the gay issue but the tape captures the flagbearer addressing a gathering in Twi; ‘……mebooso ka kyekyire no se, “manner” a ebia ode asem no to dwa no, Ghanafuor ani nhyeda eni angye ho nea okaa ye no ho, eno no dee Ghanani biara nni ho a ebeye no de’. Meanwhile, Nana Addo and his team are expected to return to Accra later on Tuesday.