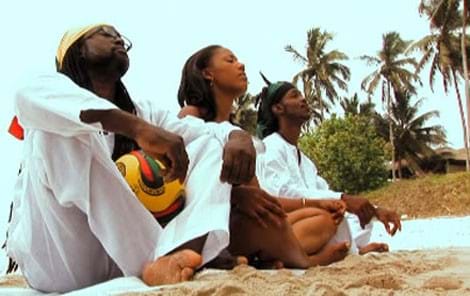 The latest movie, ‘White Is Black’, starring Ghana’s hip life originator, Reggie Rockstone, is set to be premiered at the Golden Tulip Kumasi City Hotel this weekend, 16th and 17th of July 2010, between 6pm and 8pm sharp. Speaking at a media launch in Kumasi on Thursday, Reggie Rockstone, who just ended his musical career, disclosed that this was not the first time he had been contacted to take a role in a movie production. According to him, he accepted to play the role offered him in ‘White Is Black’ because he saw a reflection of his life in the story line. Rockstone, also known as ‘Oseikrom President’ further observed that the shooting of the movie was very challenging since it meant compromising his other professional activities with his new role. He however admitted that the amount involved was an incentive package. Reggie, who studied a three-year drama course in England some time ago, said it was a different ball game altogether to be in front of the camera, commending leading Ghanaian stars in the acting industry for mastering the skills. The director of the movie, Wilfred Stark Amedzro, said he used Reggie to command attention since most of the cast are all new faces. According to him, it was not because they were not competent but that they had the listening ear, stressing the impossibility to hold down the old faces in the industry. ‘White Is Black’, which is a movie that seeks to promote the African traditions alongside the corporate world, was shot at both Elmina and Accra. It depicts the true African as against what the world has been made to believe. Playing the role of a middle aged typical African artist called Nathan, Reggie, with his trademark locks, is discriminated against and rejected by a cross section of the public for his extreme Africanism, a situation prevalent in our every day life. Unperturbed by this, Nathan later finds himself fleeing from the love of the very people who rejected him, determined to remain resolute in his beliefs as a righteous African. ‘White is Black’ is a story about how an educated, middle aged, brokenhearted lawyer, who becomes a victim of misinformation on the black race, later finds peace with herself as she is accidentally re-awakened and oriented about the story of her ancestors. The premiere, which is to host the crème de la crème in the entertainment industry, is expected to whet audience’s appetite with Reggie Rockstone’s comedy, featuring Samini for the first time, as prelims before the actual movie is set to roll. Tickets are being sold for GH¢25 at Luv FM, Angel FM, Boss FM and the Venue. Also, audiences will get albums of Reggie Rockstone’s latest hits to complement their evening.