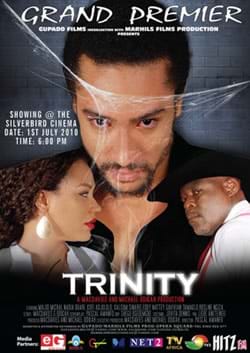 For the first time since pre-screening of movies became part of the Ghanaian showbiz industry, I recently witness a movie screening that made an effort to show pressmen something different from what the final cut would be. Producers of the upcoming release, ‘Trinity’ decided not to show us the full movie and so I am not so sure how the movie would end. However, I wish that very soon there would be a movie screening that would ask patrons for their opinions and those opinions would be factored into the movie before it gets released. If that had happened in the case of Trinity, I surely would have had a few things to point out. ‘Trinity’ tells the story of power, corruption, obsession and envy among other things that characterizes the generality of African politics. Presidential candidate, Macoy Yeboah (Kofi Adjorlolo), is a hair close to clinching political power, yet a case of corruption and drug trafficking leveled against him by Barrister Naveda Daniels (Nadia Buari) threatens his political ambition. With the assistance of Nevada’s fellow Barrister, Dan (Majid Michel), Macoy Yeboah sets up Naveda with the murderer of another lawyer, Val Ayew (Luckie Lawson). Naveda finds herself betrayed and on the run from the law, with the police on her trail. What would she do to clear her good name and to allow real justice to prevail? My highlights I was particularly impressed with the court dialogues. Although it was too obvious that Nadia and Luckie were acting as lawyers and they weren’t believable, the dialogue was real and reflective of a real court situation. The storyline is also very cool but could do with some trimming because I feel some scenes were not relevant to the ultimate story that was being told. I also enjoyed watching five year old Imogen Hogg play the role of Naveda’s intelligent and inquisitive daughter. Her control over her dialogue and reaction to the cameras was sweet to watch; a little over the top but very commendable. Seeing Majid Michel play the part of physically challenged person was quit new and I think he would move audiences to laughter anytime he appears on screen shaking and twitching. Spoilers I wasn’t impressed with the acting to a rather large extent and I wish these actors could learn a little form young Imogen Hogg. I think Majid, Nadia and a few of the cast did well with their roles but I can’t say the same for Jerry Amilo, Kofi Adjorlolo, Eddy Nartey and a few others. Jerry Amilo did look the part, as a drug-lord/criminal but his acting and dialogue just wasn’t real. It was as if he was trying to remember his lines so he could recite, painful to watch. Eddy Nartey’s role as a policeman was just too outlandish and the least said about it the better. His dialogue and mannerisms were so ‘unpolice-like’. I still don’t know whether he was a good cop or a bad cop. As for Uncle Adjorlolo, he is becoming almost boring and predictable on screen. I think he should break away from acting in a similar manner most of the time. I still don’t know why a topnotch criminal as he portrayed in the movie, kept sticking out his tongue like a dog suffering from rabies. After watching for almost two hours, I couldn’t tell whether ‘Trinity’ was a comedy, drama or whatever. The subject seemed serious and from the opening scene, you would be expecting and action thriller. However, as the film progresses it turns into a farce and all you can do is to laugh at Kofi Adjorlolo wagging his tongue or Majid in close-paralysis. The graphics and special effects even made it worse for me. Although there were some cool effects I think they were unnecessarily overused. I felt like I was watching G.I Joe cartoons allover again. What’s the point of using computer effects to write details onto someone’s business card in a movie? Picture this: a lawyer hands out a business card which is blank, the camera zooms in onto the card and contact details start to appear on the card as they are being typed! How pointless is that? So these are some of the things I would have pointed out to the director, Pascal Amanfo if I had the opportunity to share my opinions with him through the screening. Nonetheless, I am sure the story would be loved by majority of the people who would see the movie because the storyline is ambitious and a little unusual. ‘Trinity’ also features Ekow Smith Asante, Karlsoum Sinare, Roseline Ngizzah, and Gavivina Tamakloe. Trinity premieres at Silverbird Cinemas on July 1, showing at 6pm and 8:30pm.

Collateral Beauty, Will Smith Is Either Visited by Gods or Has Terrible Friends 258