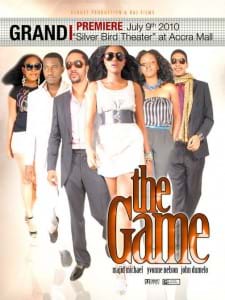 the gameif the goings on in life were to be filmed and shown on the giant screens at the silver-bird cinema at the Accra Shopping Mall, apparently not many in the audiences would afford the luxury to sit mute and enjoy what they are watching. At best many would completely be taken aback and would have right away started questioning how and why everything happened to them the way they did ,including the actions of their most loved friends and sworn foes. But,many would have also pinched themselves very hard to see if they were caught in a trance as they watched life and all its intricacies screened to them like playing a game of cards[ or spar] This exactly what the fast rising film director frank Rajah Arase has summarized into a Blockbuster movie ,blending well known actors like majid Michel, John Dumelo,Fred Nuamah and Yvonne Nelson with up coming ones like Yvonne Okoro and Nadia Acherkand to deliver The Game Quite a masterpiece, The Game intrinsically waves greed,Betrayal,Revenge and robbery through love and affection all spiced in suspense to get audiences glued to their seats. Teddy envied envies his brother bill and thereby plots to kill him as a means to inheriting all the enviroments and eastes made in their name by their late father.Teddy Thus plants two allies in the camp of Bill one being His [Bills] House maid and the other secretary. Their plot against Bill works perfectly.as he eventually shot by Shennel, a five time recidivist,who is marrying teddy on contract .unknowingly.Shennel is not the kind of person Teddy thinks she is because she is an ally of bill. Now brandy a friend Shennel also goes about granting interviews to the media hat she will soon get married to Ronny, one of the billionaire business tycoons in town.Ronny on the other hand has not ever met Brandy in his lifetime.someone definitely would be playing a fast game elsewhere. What eventually becomes of teddy s plot against his brother Bill and brandy’s game with Ronny are all gripping developments to be Unraveled in the The Game slated for a pemiering at the Silver-bird Cinemas [Accra] and Miklin Hotel[Kumasi] on July 9 this at 6pm o’clock in the evening.

Collateral Beauty, Will Smith Is Either Visited by Gods or Has Terrible Friends 256