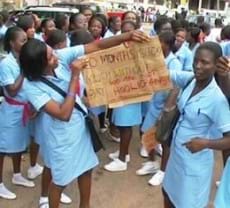 
The striking Junior Nurses and Midwives (JNM) in the Ashanti region have agreed to resume work on Thursday, October 7, after an intervention from the Ministry of Health. The Acting Chief Director of the Ministry of Health, Mr. Sylvester Asemana, is said to have sent a letter to the authorities at the Komfo Anokye Teaching Hospital (KATH) detailing them to accede to the request of the JNM. According to HelloFM Reporter, Sampson Nyamekye, the KATH administration subsequently held a meeting with the JNM following which their appointment letters have been back-dated to 2009. It would be recalled that over 500 Junior Nurses and Midwives drawn from hospitals and medicals centres in Kumasi, Obuasi, Bekwai, and other parts of the Ashanti Region, on Monday, October 4, embarked on an indefinite sit-down strike action to press home their demand for their back pay. The strike was in relation to the non-payment of their 20 months allowance back pay. The spokesperson of the JNM, Daniel Adedziwe, said once their demands have met by the Ministry of Health, they will resume work. He was categorical that any member of the striking group who fails to resume work on Thursday, will be punished accordingly.

Strains of Covid-19 discovered so far 51

Coronavirus: What misinformation has spread in Africa? 30