Mac Tontoh | Has No Child With Divorced Wife 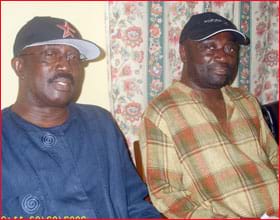 The family of the late Mac Tontoh, a founding member of Ghanaian International music group, Osibisa, has declared that Mac Tontoh, who died as a bachelor, has no child with his ex-wife. The family, which is working tirelessly to give the music icon a befitting burial, denied speculations that Mac Tontoh had a son with his ex-wife. In a chat, the late music icon’s younger brother, Joe Tontoh, told BEATWAVES that the child people are claiming belongs to Mac was adopted. According to him, his late brother had no hand in the adoption, adding “my late brother refused to be party to it because the divorced wife adopted the child from a hospital in Accra which Mac Tontoh claimed the process was wrong.” Joe alleged that because Mac is dead, the ex-wife is using every available means to create the impression that the child belongs to his late brother to attract sympathy. Joe Tontoh claimed that the family refused to invite Mac Tontoh’s former wife to be part of the one week celebration of his late brother’s death because she is not recognized by the family as his wife. He disclosed that the family is making arrangements to organize a tribute ceremony in Accra on September 30, prior to the main burial in their hometown, to give those who cannot travel to the Ashanti Region the opportunity to pay their last respect. Mac Tontoh, a leading member of the world acclaimed UK- based Ghanaian afro-pop group, Osibisa, was pronounced dead in the early hours of August 16, 2010, at the Korle Bu Teaching Hospital, Accra, after a long struggle with a number of illnesses. Before his untimely death, Mac Tontoh, who would have turned 70 in December this year, was flown to London for treatment last year during the early stages of a stroke which saw him undergo four different operations. He returned home two months ago after his health condition improved but he was admitted at the Korle Bu Teaching Hospital’s intensive unit a few days after his return, where he met his untimely death.