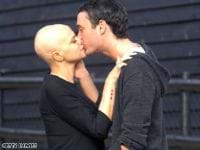 Reality TV star Jade Goody has died at the age of 27, her spokesman Max Clifford has confirmed. She died at home with her family in Upshire, Essex, overnight on Saturday after a battle with cancer. Goody was diagnosed with cervical cancer in 2008 but the disease spread to her liver, groin and bowel and she was told it was terminal in February. Her mother Jackiey Budden, who was at her side as she died, said: "My beautiful daughter is at peace." Goody had been treated at the Royal Marsden Hospital in west London but wanted "to spend all the time she had got left" with new husband Jack Tweed and sons, Bobby, five, and Freddy, four. The star died at home at 3.14am on Mother's Day. Her body was taken out of her home shortly before 8am. Media interest Speaking outside the home, Ms Budden said: "Family and friends would like privacy at last." Mourners started arriving at the house to pay tribute to Goody within minutes of the news breaking. They left floral tributes at the gates of her home. The star had been christened in a 20-minute ceremony at the Royal Marsden on 7 March while in a wheelchair and was assisted by nurses during the service. Goody's illness had featured in the media on a daily basis over recent weeks. Jack Tweed Goody's husband Tweed is awaiting sentence for attacking a taxi driver She married partner Jack Tweed on 21 February at Down Hall Country House Hotel in Essex. OK! magazine paid a reported £700,000 to cover the event. Goody stipulated that the entire amount should be passed on to her sons. The wedding was also filmed as part of a documentary series following the star and was screened on digital channel Living. Goody, originally from Bermondsey, south London, had been open about wanting to exploit media interest in her battle with cancer. She was keen to raise public awareness of the disease and prevent other women from suffering her fate. Family friend, Kevin Adams, who was with Goody when she died, said: "I think she's going to be remembered as a young girl who has, and who will, save an awful lot of lives. "She was a very, very brave girl and she faced her death in the way she faced her whole life - full on, with a lot of courage." 'Celebration of life' Even in death the cameras will remain firmly fixed on Goody as preparations are made for her funeral. Before she died she told those around her she wanted the service to be a "celebration" of her life. "She wants it to be a big celebration because it's her final farewell to everybody," Mr Clifford said. "She's the world's first reality television star. "It will be a very Jade Goody event - exactly the way she wants it." Mr Clifford said he hoped Goody's family would be left in peace to grieve. Tweed, 21, is awaiting sentence after he was found guilty of attacking a taxi driver and threatening to stab him after leaving a club in Essex last year. He was jailed for 18 months last September after assaulting a teenager with a golf club.