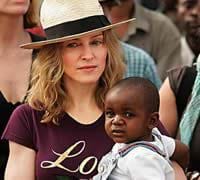 US pop star Madonna has said she may adopt another child from the poor southern African country of Malawi despite the controversy surrounding an earlier adoption. Critics accused the government of skirting laws that ban non-residents from adopting children in Malawi, which has been badly hit by the Aids epidemic, after Madonna took on David Banda. "Many people - especially our Malawian friends - say that David should have a Malawian brother or sister," she said in response to emailed questions from Malawi's the Nation newspaper. "It's something I have been considering, but would only do, if I had the support of the Malawian people and the Government." A Malawian court approved the adoption of David last year. Madonna has said the controversy had been difficult to deal with but she was happy to be involved in a case that might pave the way for more adoptions in Malawi. An estimated one million children in the country have been orphaned by Aids. Madonna, who began adoption proceedings in 2006, took David when he was 13-months-old after his father had placed him in an orphanage following the death of his wife. David is growing up in the high-flying life of a leading popstar, worlds away from his village of Lipunga, where Banda's relatives eat staple food like maize meal from simple bowls and meals are cooked on open fires. Madonna said she wanted to keep him connected to his homeland. "It is a big priority for me to educate my son about the world, but always to stay connected to his Malawian culture," she said. "He has a big map of Africa in his room with lots of arrows pointing to Malawi." Madonna said her divorce from film director Guy Ritchie would not deprive their children of either parent. "I believe in family. So, everything between us is very amicable...we both agree that our children should always feel a deep connection with both their parents. It is our responsibility to give them that foundation," she said." - Reuters