Obuor Stands Up For The Youth 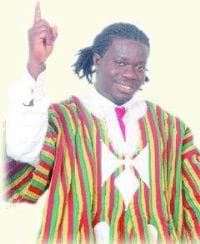 Hiplife artiste, Obour has never been scared of stoking up controversy and he is now questioning why the Constitution prevents young people from becoming President of this country. The musician has launched a Youth for President campaign to address what he regards as deliberate marginalisation and discrimination against young people. He told Graphic Showbiz he will roll out a series of activities to articulate his concerns, starting next week with the release of a song called Manifesto. He believes music is a vital platform to use to tackle issues concerning the youth. “As a musician, my abiding aim is to use music as a tool for change. I believe we would be limiting ourselves as a people if we reduce music only to the level of entertainment. That was why I came out with the Road Safety Campaign project which is still relevant. Through music I have also embarked on a project in collaboration with ReadWide Ghana dubbed ‘Ghana Reads’. That seeks to promote reading among Ghanaians since that is one of the best ways through which we would remain competitive in a world highly underpinned by information”. Obour, whose real name is Bice Osei Kuffuor, said it is a similar spirit that has driven him to embark on his current project for youth development. “As a young person myself, I very much appreciate the extremely harsh challenges young people go through on daily basis. “I have observed that almost every decision in this country is skewed against the youth. They are not allowed to be an effective part of the decision-making process. The Constitutional provision that makes it mandatory for people to run for President only if they are 40 years and above is not in favour of young people and should be amended”, Obour advocated. He indicated that the campaign is not for him to become President but rather to fight the cause of the less-privileged and vulnerable youth who are in the majority. “The youth of Ghana contribute so much to the development of this country and yet the system is seriously biased against them”. The multi award-winning rapper said the campaign is to open up discussions and help erase the erroneous perception about the youth in terms of their ability to deliver if given the chance. His view is that people should learn to “deal with the youth by the content of their character” and not by age. He said the era where young people were seen as unwise must cease because “wisdom has nothing to do with age and we must grasp that as a nation”. Obour stressed that if young people could get married, manage their homes and businesses and are allowed to run for Parliament, he did not see why they should be prevented from becoming President. “I am not speaking for or against any political party. I’m only requesting that matters affecting the youth of this country are given very serious attention by the relevant bodies.” “I mingle with youth from all walks of life so I know what I am talking about. I have been in the ghettos before. I have tasted both sides of life and have had the opportunity to experience other cultures outside Africa. That collective experience has honed my passion to champion a youth agenda to fight for a brighter future for the youth of Ghana.” He said he was aware of the slippery nature of the terrain he is stepping into but then it is necessary for someone to lead the crusade for things to change for young people. According to Obour, the youth could not continue to allow themselves to be “reduced to tools for violence by political parties and some powerful elements in society” who only see the importance of young people at election time or when there is a dirty job to be done. Obuor’s arrival on the local music scene some eight odd years ago was made on the wings of a controversial character he portrayed on his maiden album, Atumpan. On that album, Obour portrayed himself as a scary person who came out of the ground, ate broken bottles and could lie for a loaded truck to run over him without getting scarred in any way. Since the creation of that controversial character, Obour has gone on to release one controversial album after another. So is the youth development campaign the most controversial issue Obour has engaged in so far? “I hope it is not but even if it is, I say I’m ready for it”, he exclaimed. “What I’m up to now is only the first phase of a serious youth advocacy campaign to erupt in this country.”