Meet The Lady On The Trumpet 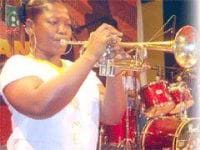 As soon as the Master of Ceremony for the Bands Alive programme on TV3 announced that the Amen Band had won the contest, a young man in the audience said quite audibly that it was because of the lady trumpeter in the band since all the judges seemed to like her so much. Joana Denaka was the lady being referred to. She was the only female instrumentalist in the competition and she obviously caught everybody’s eye with her cool demeanour and confidence on the trumpet. “I’m happy we won. We have our own equipment now and I know that will inspire us to stay and work together as a tight, exciting unit. We thank everyone who contributed to our success in Bands Alive.” Joana came to Bands Alive with a wealth of experience under her belt. She started playing the trumpet more than 10 years ago to show her friend who played the side drum in the Holy Family Catholic Church brass band at Mataheko that she was capable of dealing with a more difficult instrument. Meeting Charles Duwor, then a regular pianist at the Golden Tulip Hotel in Accra turned out to be a blessing for her. She was introduced to jazz and that stimulated her appetite to learn more. Her immersion into jazz meant listening regularly to and analysing the music of trumpet greats like Dizzie Gillespie, Miles Davis and Wynton Marsalis. She has since played in Ivy Stone and Amakye Dede’s bands and backed high-profile musicians like Paapa Yankson, C. K. Mann, Ebo Taylor and Hugh Masekela. Two years ago, she won a scholarship to attend a summer programme at the prestigious Berklee College of Music at Boston, Massachusetts in the United States. Her ambition is to be rated among the best instrumentalists on the continent and she believes she is on the right track to achieving that. For now she is devoting all her attention to playing with Amen and entrenching themselves as a solid, reputable band.