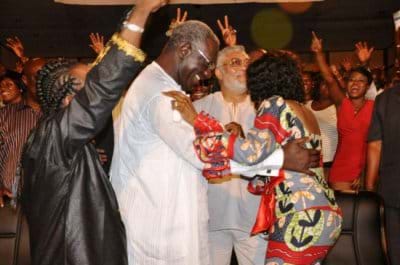 Ex-Presidents Jerry John Rawlings and J. A Kufuor standing side by side, dancing and cheering were a few of those rare sights Ghanaian music lovers and fans were treated to last Saturday, November 12 at the Accra International Conference Centre. It was a nostalgic and touching feeling.

The event was the maiden edition of the “Legends and Legacy Ball” concert, the celebration and honouring of a living legend, Daddy Lumba.

The night was charged with unity and pure delight as the two august personalities of the opposing sides interacted and bonded over Ghana’s renowned Highlife star, Daddy Lumba’s authentic Ghanaian music.

It was even more interesting to see former president Kufuor and hit the dance floor with Nana Konadu whiles Rawlings sat watching; bobbing his head in approval. The climax of it all was when the three of them took to the stage as the man of the night DL was performing his biggest hit song “Aben wo ha”. This had everyone on their feet applauding and dancing along with them.

When the Kwaw Kesse took his turn on stage to perform, he commended the unity and statesmanship exhibited by the two former Presidents on the night. He shook hands with them, thanked them and insisted Rawlings and Kufuor shook hands. The two stood face to face and shook hands and the crowd could not help but scream and clap. DL known in his private life as Charles Kojo Fosu, did same by thanking the two former presidents for coming together during his last performance. Daddy Lumba expressed his excitement and thanked the two former Presidents for setting a good example for the younger generation.

Musicians Union of Ghana (MUSIGA) President, Bice 'Obour' Osei Kufuor, presented a plaque on behalf of the union and read from the citation on the plaque to Lumba.

Organizers of the event - Imajin Advertising- presented a 24 carat gold chain, a plaque among others to Daddy Lumba which given to him by a representative from Voice of America and Daddy Lumba’s godmother and former teacher, Mama Acheampong.