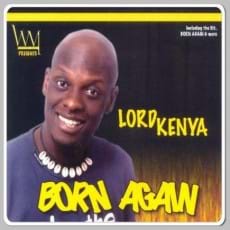 The past three weeks have been revealing for rap heavyweight champion, Lord Kenya who says that he has been ‘arrested’ by the Holy Spirit and is now a true born-again Christian. In a chat with Showbiz last Monday, Lord Kenya said he has put the world behind him and is now enjoying an amazing relationship with God. According to him, everything started when he went to his regular ‘wee’ base to get his supply of the stuff after seeing off a friend. “It was there that I was hit by lightning and I fell flat. I tried getting up but I couldn’t so I went on my knees in a prayerful pose and started crying like a baby”. “I refused to take my usual supply of ‘wee’ that night and headed home but I was ‘arrested’ by the Holy Spirit and ended in a church in my neighbourhood called the Christian Eoanerges Gospel Ministry where I was warmly received and anointed. “All the while, I was crying. I have not been the same since that night. I have quit smoking and drinking and now spend my time in the house of the Lord. I have become very prayerful as well.” Lord Kenya said it baffles him that he sleeps very well these days without the aid of alcohol or ‘wee’ because he knows those are very difficult habits to kick but he has been able to do that by the abundant grace of God. “Now I cannot stand the scent of alcohol or ‘wee’ and I am trying hard to convince those I used to smoke with to quit the habit.” According to Kenya, he feels extremely relieved and humbled by the whole process, adding that he is the happiest person on earth. “I realised I was lost but have been found. There is a perception among young people that smoking makes one tough but all that is not true. The money people spend on ‘wee’ can be used on more useful things. I will take it upon myself to talk to all those I used to smoke with to quit smoking. Asked whether he will quit hiplife to do gospel music, Kenya said he will be directed by the Holy Spirit. Perhaps this whole transformation should have come as a surprise to those who have been closely following his career. He has albums titled Born Again and God Dey. When Showbiz spoke to him two years ago, he was full of praises to his Maker and attributed everything he had achieved to the good Lord. That was after he had released Born Again and was just about to release God Dey. “If it is not God, somebody should tell me who has kept me safe and alive all these years despite the tribulations and the unexpected things that happened to me. I lost my little daughter and I grieved so much but there have still been some moments of happiness for me,” he said.“I’m testifying that against all the odds. He makes me see the light and I know He can do the same with everyone else,” he added. Many may perhaps find it curious that a personality like Lord Kenya is preaching such ideals with almost Biblical fervor. He, however, states that he has always been a God-fearing person and his faith keeps deepening all the time. “All along I thought I had the strength to carry on. I thought it was mainly me but as I was moved on, I realised more and more that it is God who has the authority to control everything.“Now I understand that He has His own ways of shaping up His people to do what He wants them to do till the end of time so we have to just flow along with Him and thank Him for His mercies. Commenting on the choice of titles for his last two albums, Kenya said; “I’m just trying to put God as the supreme. We all make music and name them anyhow. People say what you call it does not matter and all that but what matters most to me now is eternity. What matters is what happens to me when I am no more on this earth. Why do I then have to put my hope in things that are not important for my salvation?”