I Was Distracted By A Naked Lady 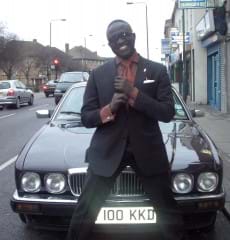 One of Ghana’s ace broadcasters, Kwasi Kyei Darkwah aka KKD or ‘The Finest’, has told News-One that in his 25 years’ experience as broadcaster, the only thing that was able to distract him was the nakedness of a beautiful lady. KKD said what made the matter worse was that the naked lady embraced him so tightly that he was momentarily mesmerized as he stood there helpless. “My worst experience happened after a show when I was backstage. A lady who was virtually naked embraced me. That was terrible, I was young at the time and it was an absolute distraction,” he revealed. The ace broadcaster would not explain the circumstances under which this happened and how he ‘delivered’ himself from the ‘distraction’ but said the incident happened at a cinema hall in Accra. KKD recently celebrated his 25 years in the media with ‘The Finest All White Barbecues’ which was organized by The Finest Productions and Ghana Showbiz Worldwide in Accra, Cape Coast and Kumasi. It featured some seasoned artistes including Maestro Kojo Antwi, Amandseba, Gyedu Blay Ambolley, Bessa Simons, Nana Boro, Okyeame Kwame, Kwabena Kwabena, Reggie Rockstone and four bands from the Bands Alive show on TV3. KKD would be sending his celebration to New York and Amsterdam on 11th and 18th December respectively. He is one of the fashionable showbiz personalities in the country currently. KKD commenced his career at age 20 as a radio and television presenter and has won many awards over the years. The Finest, as he is well known, holds a Masters of Arts Degree in Film and Television production from London Metropolitan University, Certificates in Marketing Management from Ghana Institute of Management and Public Administration (GIMPA), Production and Cost Management from the Association of Overseas Technical Scholarship of Japan, Delivering Learning to Adults from Westminster Adult Education Service, UK and Diploma in Journalism from Ghana Institute of Journalism.