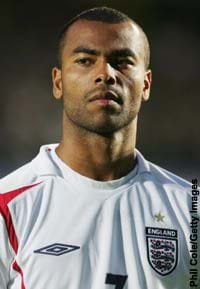 Just one day ahead of the Champions League final against Manchester United, Chelsea received a serious setback as Ashley Cole might not be fit to play. Cole injured his right ankle during training at the Luzhniki stadium of Moscow on Tuesday. The injury was caused by Claude Makelele, and the player needed treatment from Chelsea's medical staff. If Cole is unable to play tomorrow, he will most probably be replaced with reserve left-back, Wayne Bridge.