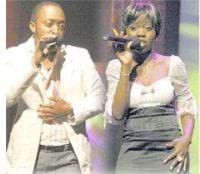 Zambia’s Trinah and Uganda’s Faycal are joining Zimbabwe’s Ammara and Kenya’s Cynthia in the Idols Top 10! The newest two additions were announced during the second Idols elimination show on M-Net on Monday night. Fans of the music reality series hit the voting lines when they opened right after Sunday night’s Group Two performance, and put the dynamic duo through on the power of their performances. Trinah won the public’s votes with her soulful rendition of Leo Sayer’s classic ballad When I Need You and Africa seemed to agree with judges’ comments that her performance was “amazing”! Faycal – one of few guys left in the competition - rocked the house with Queen’s mega hit Crazy Little Thing Called Love. He charmed the judges and he also won over the continent’s voting audiences, as Africa voted the talented performer through to the Top 10. With four spots left to fill in the IDOLS Top 10, before the judges add their two ‘wild cards’, it’s all eyes on this Sunday’s Group Three performance. DStv audiences can tune in as Adiona (Zimbabwe), Chibwe (Zambia), Doris (Kenya), Eric (Zimbabwe), Nicollette (Uganda) and Samukeliso (Zimbabwe) perform on Sunday 18 May on M-Net. Viewers may vote for their favourite contestants by phone, text or SMS. Voting opens immediately after the Sunday night show (May 18) at 4pm and closes on Monday morning (May 19) at 8am. All calls and texts are charged at premium rates and results will be verified by Alexander Forbes. Idols is headline sponsored by Celtel and produced by WaterFront Television.