Guy Ritchie Has Vowed To Fight To Save His Marriage 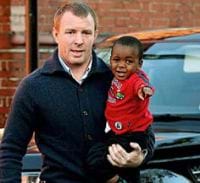 Guy Ritchie has vowed to fight to save his marriage to Madonna. The British film director is desperate to keep his family together and has begged Madonna to reconsider their split because he can't bear to be apart from their children. Both Guy and Madonna - who raise three children together, Lourdes, Rocco and David - have been seen without their wedding rings, and remain on different sides of the Atlantic, with Guy in England and Madonna in New York. Madonna, 49, is reportedly planning to move to America permanently, and is renovating an apartment in New York. Guy is said to be deeply concerned he will see less of his three children, particularly Rocco - the couple's only biological child together - if he and Madonna divorce. A source said: "Guy categorically denies he will go along with a divorce. He refuses to risk losing full contact with Rocco - or putting his son through a break-up. The £50-million he could receive from a divorce settlement pales into insignificance compared to his love for his son." Meanwhile, Guy, 39, spent the weekend being comforted by Sting's wife Trudie Styler at a country retreat. The pair were spotted at a local pub deep in conversation, with Trudie - who first introduced the filmmaker to the Hung Up singer - offering Guy her support. A source told Britain's Daily Mirror newspaper: "Trudie is the person responsible for putting Madonna and Guy together, so she almost feels part of the problems. "She is very close to both of them and could act as a go-between if things get worse. She also knows Madonna well and is well-placed to advise him. She can see it from both sides and I am sure Guy would be keen to take her advice." Guy is set to fly out to New York to meet Madonna for crisis talks this week.