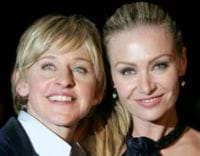 Talk show queen Ellen DeGeneres will marry her actress girlfriend Portia De Rossi in a lavish ceremony in Palm Springs, California later this year, according to reports. Since California lifted its ban on gay weddings last month, the pair has been busy planning the celebration, which will take place at the Riviera Resort and Spa in Palm Springs, according to the New York Post. A source tells the newspaper, "They didn't sign the contract yet, but they're working out the final details and security. The hotel is doing $70 million in renovations that will be done in October. They said they wanted to have the ceremony in the tropical gardens, by the pool and the reception in the grand ballroom. They will also close a significant portion of the hotel." DeGeneres has already promised to air a "tiny bit" of her wedding on her talk show.