Ghana’s Most Beautiful To Focus On Disability Project 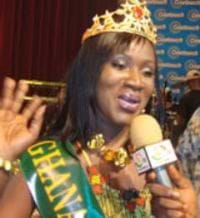 Sarah Adoley Addo, Greater Accra's representative who was crowned TV3's Ghana's Most Beautiful 2008 last weekend, has assured Ghanaians of her commitment towards executing her disability project. In an interview with The Saturday Statesman, she said in spite of her parents being disabled persons, the project is dear to her heart and for that matter, she was going to work hard with the help of Ghanaians and other NGOs, to accomplish her goal. So much overjoyed during the interview, Adoley had nothing to say but to thank the Almighty God and Ghanaians for making her dream a reality. She said, "I am very happy, flabbergasted, perplexed, in fact and very much elated. It's a dream come true and a true life experience. Though there were some few lapses in my performances, the audience knew what lies in me and I believe that is why they vigilantly and accordingly voted for me." The winner of last year's competition, Ama, was able to execute one out of her two projects by donating GHc2,000 and books to two orphanages in the Central Region, with sponsorship from Onetouch, Ghana Telecom's mobile telephony network. Adoley never lied when she told us in an interview some few weeks ago that all her friends are males. Over 100 of her 'area boys' gathered to accompany her home after the event. One of the guys called Nii Lamptey, was so happy that he poured two bottles of Champaign on himself at a spot. Explaining why he did that, he said “I am pouring it for Adoley because she is the only one who deserves it, and I will do anything for her because she likes everybody in our area, irrespective of who you are.” Fanny, who looked so disappointed when she was announced the 2nd runner-up, had this to say. "I'm not all that disappointed; we all have the potentials and each of us was willing to be crowned as the Most Beautiful. But I wouldn't deny the fact that I'm quite disappointed for not being able to retain the crown in the Central Region but all the same, I still stand as a role model to all women. I will advise them not to suppress themselves. They must prove themselves right by doing the right things always with determination." One may wonder why the Volta Region has emerged the 1st runner-up for the second time. What is so unique about your region Eyram? "I think we are the best when it comes to culture, and we also have a lot to offer to the society. I tried my best to move the region from the second position to the first, but things couldn't work out the way I expected. All the same, I am happy with my position, and I thank God for that." She not only emerged the 1st runner-up, but she also had the Best Skin award with a one year free hair beauty treatment. Adoley went home with a Tata Indigo saloon car as part of her prize, apart from a Tata Safari saloon car she will use for ceremonial activities for one year, also donated by PHC Motors.