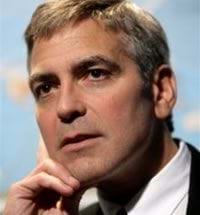 George Clooney says it's a huge responsibility being sexy. The Ocean's Eleven actor - who is regularly voted the world's sexiest man - dedicates a lot of time to his appearance as he wants to protect his reputation. He said: "I spend at least three or four hours a day in the bathroom. Being sexy day and night is a big responsibility. And I like taking it!" The handsome actor is also worried about losing his hair as he thinks it will affect his sex appeal. He said: "I can only talk about my own experiences. With me, it's the hair. If you have beautiful and strong hair, then you're successful with women. In the case of hair loss, it's all over." George - who recently split with girlfriend Sarah Larson - also insisted he doesn't deserve his playboy reputation because he isn't afraid of commitment. The 47-year-old star, who has been married once before, told In Touch Weekly magazine: "For a long time I took every chance to say that I was not going to marry again. So I became very careful after a failed marriage. But am I afraid of committing? It's never occurred to me. What do people say, 'A good wife at the cooker is worth gold'! "I'm not a playboy. If I had been with all the women that I was said to have been with, I wouldn't have had the time to shoot one single movie!"