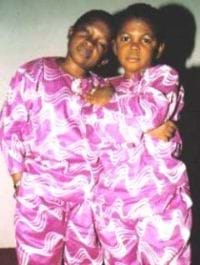 Following the plan by the Board of Trustees, Actors Guild of Nigeria (AGN) to ban the duo of Chinedu Ikedieze (Aki) and Osita Iheme (Pawpaw) from playing immoral roles in movies, their fans, both within and outside Nigeria have continued to plead on their behalf. Since the news of the ban was first reported by NFC three weeks ago, fans of the pint-sized actors have been piling pressure on the Ifeanyi Dike-led board of trustees to pardon their favourite movie stars. The fans, most of whom called from Ghana and London, pleaded that the board should consider the condition of Aki and Pawpaw, and thereby give them a free hand to make money, since that is the biggest thing that may give them joy. Speaking with NFC on the development, Ifeanyi Dike said the pressure has been so much on him that he is currently considering how to strike a balance on the issue. “You know it was after the board received numerous letters from parents that the decision of banning these boys from playing immoral roles was reached, but now, people are seriously begging us not to take the action. “I never knew they have such huge number of followers until I started receiving phone calls and text messages that they shouldn’t be banned. To my greatest surprise, most of the calls I received were from Ghana and London. “A lady, Nana, called from Aflao, Ghana, and she was actually crying on phone that I should leave Aki and Pawpaw alone. That really touched me,” Dike said. Some of the pint-sized actors’ fans who also spoke to us in Nigeria, reiterated that there isneed for the AGN board of trustees to think twice before taking the decision. “I think the most important thing is that the law that says people below age 18 should not watch certain movies be enforced. If that is done, then obviously Aki and Pawpaw have no problem taking the roles that they are accused of,” a fan who identified himself as Olumide said. Three weeks ago, the AGN board of trustees led by its chairman, Ifeanyi Dike, after receiving complaint letters from parents in the country said it will ban Aki and Pawpaw from taking immoral roles in movies because they are role models to innocent kids who watch their flicks.