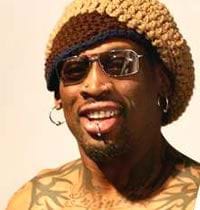 Prosecutors say they have charged former NBA star Dennis Rodman with domestic violence for allegedly hitting his girlfriend at a hotel last month. Los Angeles City Attorney spokesperson Nick Velasquez says Rodman was charged on Wednesday with spousal battery, brandishing a deadly weapon, and one count of dissuading a witness. The charges were misdemeanors. The 46-year-old was arrested at a hotel April 30 after Gina Peterson called hotel security. Police say she suffered injuries to her arm. Rodman spokesperson Darren Prince says Rodman had had too much to drink when he got into an altercation with Peterson. Prince says the couple is still dating. "We look forward to a successful resolution of this misdemeanor matter," said Rodman s attorney, Paul Meyer. Attempts to find a phone listing for Peterson were not successful.