David Blaine Back On Feet After Stunt 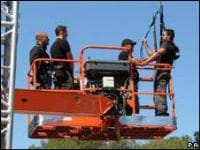 US illusionist David Blaine has ended his latest stunt in New York amid claims he reneged on his pledge to hang upside down for 60 hours. The 35-year-old magician was hoisted by his heels over the Wollmann ice rink in New York on Monday, stating he would remain that way until Wednesday night. However, he was seen taking regular breaks on his feet to drink liquids, urinate and undergo medical checks. Blaine ended his stunt by making a "dive of death" off a 44 foot platform. His previous stunts include spending 72 hours encased in ice, seven days underwater and 44 days in a plexiglass box. 'Unimpressed' Several hundred fans cheered at the climax, which was broadcast live on US TV network ABC. But some claimed they had been duped into believing Blaine would remain inverted for the entire 60 hours. "I am totally unimpressed," said one onlooker. "If his name hadn't been David Blaine I would never have come." Blaine shrugged off criticism during the stunt, telling one interviewer that he was "not going to pee all over myself".