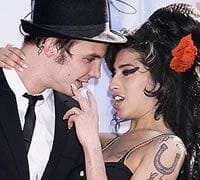 Amy Winehouse and Blake Fielder-Civil have turned to God to help save their marriage. The Back To Black singer spent her first wedding anniversary away from husband Blake Fielder-Civil - who is currently on remand in London's Pentonville Prison awaiting trial on charges of grievous bodily harm (GBH) and attempting to pervert the course of justice - on Sunday. Blake - who filled the pavement outside Amy's London home with flowers - has turned to Catholicism in an attempt to turn his life around according to his mother Georgette Civil. She said: "He's trying to turn over a new leaf while he's in jail and he's gone back to his faith which seems to be helping." A source close to the couple added: "Even though he is in prison, Blake knew with just one phone call he could make a grand gesture with flowers and show he hadn't forgotten her. "He wanted her to know he still thinks she is pretty special. Blake has been praying because he thinks it's the only thing that will make any difference." Amy reportedly spent the anniversary drowning her sorrows at home, but emerged to collect the flowers from the pavement.