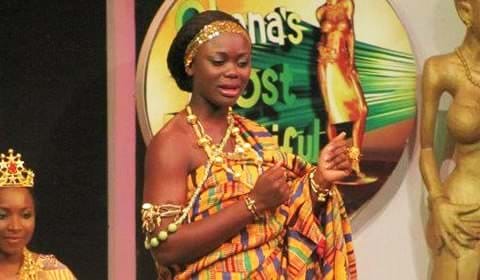 The Ashanti regional representative in the 2011 edition of TV3’s Ghana’s Most Beautiful beauty pageant, Salomey Amoakoa Mensah known as Akua, has been crowned winner of the this year's pageant. Akua, a product of Takoradi Polytechnic, after 13-weeks of grueling competition dazzled not only the judges but the show's avid viewers to beat three others, Enam from the Volta region, Akweley from the Greater Accra Region and Abena from the Brong Ahafo region, on the finale night. On the night that mattered and when everything was down to the wire as the four, earlier outwitted six others in a week-in-week-out live studio competitions to reach the finals, Akua, a native of Kuntanase stood out. It was however not a smooth sail for Akua as the three other contestants – especially Enam, who was equally eying the crown, brought everything to bear. It was a stiff race to fame and glory. Judges for the night, David Dontoh, Torgui Ekllah and the adorable Linda Ampah had a tough task of sieving through the four outstanding beauties who had brains to match. From the word go, the four wowed the packed Theatre on the cat-walk - modeling African, dinner and casual wears – it was stunning beauty come alive. After the show of physical beauty, their brains were put to the test. They were each engaged in a question and answer session. The questions were tough as some clearly struggled with their answers. At this point, per the answers, Akua and Enam stood out as their anwers received cheers and applause from their fans and audience. On the talent exhibition front, Abena who was first to be called acted as a widow who was carrying a seven-month-old pregnancy. Enam played the role of a slave during the slave trade with a call to end modern day slavery. Akwaley acted a fetish priest and through the Tigari dance, she called for environmental cleanliness. Akua was a spiritual priestess healing the woes of mankind. In all, their acting prowess were put to the test and they did deliver. The final task on the bill for the contestants, inching them closer to the crown, was to convince the judges and the audience why they should be crowned Ghana’s Most Beautiful – why they deserved the crown. After the results were collated, Akua was crowned winner of the reality show - succeeding last year’s winner Ama from the Eastern region. She walked away with a KIA saloon car, GH¢7,000, a year’s supply of GTP wax prints, and hampers from sponsors. Enam was adjudged first-runner-up. For her price, she was given GH¢6,000, one year supply of GTP wax prints, a Millennium Development Goal (MDG) Youth Ambassador and hampers from sponsors. Akweley and Abena were adjudged the third and fourth place respectively. They won GH¢5,000 and MDG Youth Ambassador and GH¢4,000 and MDG Youth Ambassador respectively. Aside the beauty and brains on display, patrons danced to exciting tunes from music great Nana Acheampong, 4x4, Cecilia Marfo among others. The Dance Company also put up a splendid choreography performance.

Excellent
Gadget Votes: 1 |2 out of 5
Prev article
Next article