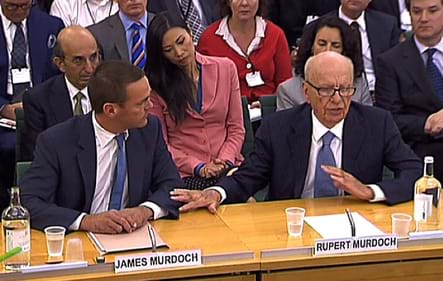 Rupert Murdoch, his son James and wife Wendi (centre) at the committee hearing


A protester lunged at media tycoon Rupert Murdoch during a committee hearing in the British parliament into the phone hacking scandal that has shaken his corporation, the police and the government. The chairman of media conglomerate News Corp. and his son James, who heads the company's British arm, were appearing before MPs of the media select committee in London on Tuesday. The committee hearing was suspended for a time when the man rushed forward from the public gallery wielding a pie made of shaving foam. He was fought off by a group of people including Mr Murdoch's wife Wendi, who leapt up and hit the man. Rupert and James Murdoch were called to answer questions about employees of the News of the World newspaper hacking into the phone accounts of thousands of people, and accusations that the paper paid police officers for information. James Murdoch told the MPs that the phone hacking episode had been one of great shame for the organisation. "I would like to say just how sorry I am, and how sorry we are, to particularly the victims of illegal voicemail interceptions and to their families." Rupert Murdoch told the hearing he was not responsible for the scandal and and unaware of the extent of the phone hacking. Mr Murdoch said he was let down by people he trusted and has not considered resigning. "I think they behaved disgracefully - betrayed the company and me - and it's for them to pay." He told MPs it was the most humble day of his life and later said he was shocked, appalled and ashamed when he read two weeks ago of the case of murdered teenager, Milly Dowler, whose voicemail messages had been hacked into. Mr Murdoch said he and his executives decided to close the News of the World tabloid because the paper had lost the trust of its readers. Rebekah Brooks, the former chief executive of the British arm of Mr Murdoch's company, News International, is also being questioned about the scandal. In a separate parliamentary hearing, Sir Paul Stephenson, who resigned as the Commissioner of the Metropolitan Police, and John Yates, who quit as assistant commissioner, will face searching questions over the Met's failure to get to the bottom of what was going on. They will be followed by the Met's director of public affairs, Dick Fedorcio.