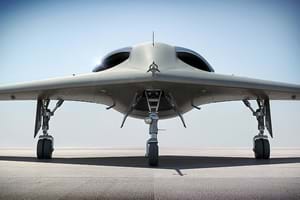 
Iran said on Sunday that it shot down a U.S. stealth drone near the country's eastern border, but U.S. officials in Afghanistan said the craft could instead be an unmanned reconnaissance plane that veered off course and crashed last week. Iran's official Islamic Republic News Agency quoted a military official who said Tehran had downed an RQ-170 Sentinel, the U.S. Air Force's stealth drone. U.S. and NATO officials wouldn't say what kind of American drone had disappeared, but U.S. officials said there was no indication that the aircraft had been shot down by the Iranians. One American official said the drone likely suffered from a mechanical failure. American officials said they believe that after the remote pilots lost control of the aircraft, the drone crashed in an unknown location. On Sunday afternoon, the North Atlantic Treaty Organization's command in Afghanistan said the Iranians may have been referring to an unmanned craft lost while flying a mission over western Afghanistan "late last week." "The operators of the UAV lost control of the aircraft and had been working to determine its status," said the statement released by NATO's International Security Assistance Force. The drone "suffered minor damage and is now in possession of Iran's armed forces," IRNA quoted the military official as saying. The news agency reported that the official also warned of a strong response if the U.S. were to violate Iranian airspace. Iran's assertion that it had shot down the drone wasn't the first such claim it has made. In January, Tehran said its forces shot down drones in the Gulf. In July, it said it shot down a drone near the city of Qom. U.S. officials rebutted those claims, and Tehran produced no evidence. The repeated Iranian claims about American drones, and the U.S. denials that have followed, reflect the continued high level of tension between Washington and Tehran. The U.S. has been orchestrating increasingly restrictive international sanctions over Iran's nuclear program, charging that the regime aims to build a nuclear weapon. Iran, which denies those claims, has been stepping up its defiance against the West. Last week, Iranian protesters attacked the British Embassy in Tehran. Iran frequently threatens Western militaries. In the Persian Gulf, small Iranian boats often veer menacingly toward U.S. and British warships. The RQ-170 Sentinel was the type of stealth drone used to conduct surveillance on the compound used by Osama bin Laden in Abbottabad, Pakistan, before the May raid by Navy SEAL commandos that killed the al Qaeda leader. The U.S. has flown missions with the RQ-170 Sentinel from bases in Afghanistan, but most of its capabilities remain classified. It is also known by a nickname, the "beast of Kandahar," earned when aviation enthusiasts first spotted the craft flying from Kandahar airfield in Afghanistan. If the drone that went down is an RQ-170, and if it is largely, or partially, intact, it is possible that the technological secrets of the advanced aircraft could be compromised. Even if Tehran didn't have the capability to replicate the technology used in the Sentinel, Iran could sell the drone to China or Russia, countries that would have a far easier time replicating the drone's technological secrets. Not only does the drone likely use advanced coatings and materials to make it difficult to detect by radar, but the drone also likely has the U.S.'s most-cutting-edge sensor technology, including sophisticated cameras and listening devices. Defense analysts have speculated in the past that the Sentinel, built by Lockheed Martin Corp., was based in Afghanistan not just to conduct secret missions into Pakistan but also for surveillance of Iranian military sites. The stealth drone was originally part of the Air Force's classified fleet and its existence was officially denied. But the service now makes available a fact sheet about the aircraft. The drone is a wing-shaped aircraft, like the stealth bomber, a design that is supposed to make it less visible to radar. The number of Sentinels that the Air Force operates remains a closely guarded secret. The "RQ" designation is used for unarmed drones, such as the RQ-4 Global Hawk. But some analysts have said the U.S. might try to arm the airframe at some point in the future. Iran claims to have its own fleet of unarmed drones, but U.S. officials question Tehran's ability to conduct even short-range reconnaissance with unmanned aircraft.