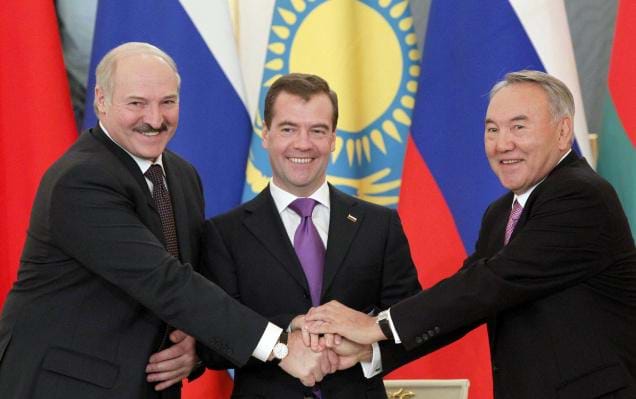 Russia, Kazakhstan and Belarus have agreed to create a Eurasian Union, an economic body designed to reintegrate the former Soviet economies. Russian President Dmitry Medvedev and his Kazakhstan and Belarus counterparts, Nursultan Nazarbayev and Alexander Lukashenko, signed a package of agreements to promote Eurasian economic integration at a summit in Moscow on Friday. The three countries set up a customs union last year that will pave the way for a “single economic space,” a closer-knit union, next year. The Eurasian Union, which would have its own executive body, would mark a further step in economic integration on the lines of the Brussels-based European Union. Prime Minister Vladimir Putin first formulated the idea of a Eurasian Union to act as a bridge between Europe and Asia in a newspaper article published shortly after he announced plans to return to the Kremlin as President in the 2012 elections. Mr. Medvedev said at the signing ceremony that Russia, Kazakhstan and Belarus will build a new economy as the countries that share common history and similar development patterns. He said the new union would be open to other countries to join, but only on the basis of “a roadmap that may take a year, two years or 15 years to cover” to qualify for membership. Kyrgyzstan and Tajikistan have already applied to join the customs union, and Ukraine is mulling the option.