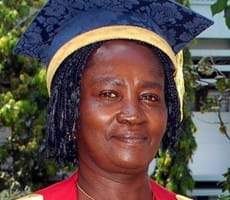 
Authorities at the University of Cape Coast have expelled 136 students from the school for poor academic performance. The Vice-Chancellor of the university Professor Naana Jane Opoku-Agyemang made the announcement at this year’s matriculation ceremony to admit 5,081 fresh students into the university. Furthermore, nine students from the university who were also found guilty of indecent conduct in recent clashes between Casely Hayford Hall and Atlantic Hall have been rusticated. The two halls a few months ago clashed for a battle of supremacy resulting in several degrees of injuries to students and destruction to university property, which nearly disrupted the institute’s academic activity. Joy News’ Central Regional correspondent Richard Kojo Nyarko reports that the Vice-Chancellor also reminded students that officials of the school would not condone indiscipline, and noted that the University of Cape Coast has an enviable reputation that it has to protect. Prof. Opoku-Agyemang, therefore, urged the matriculants not to bow to peer-pressure. “You can listen to all suggestions but the decision would have to be yours and you must also be willing to accept the consequences.”