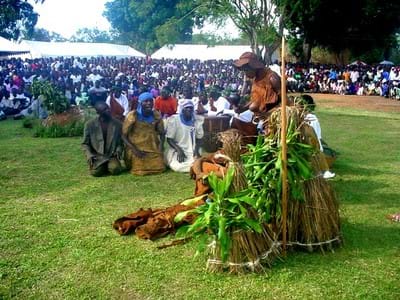 Traditional way of Greeting among Banyoro The Banyoro used pet names empako when greeting one another. These pet names are said to be of Luo origin and there are eleven in all. There are twelve if the word okali is included but it is not empako in the real sense. The real empako are; Abwoli, Adyeli, Araali, Akiiki, Atwooki, Abwoki, Apuuli, Bala, Acaali, Atenyi and Amooti. When people who are related greet each other, the young sits on the elder’s lap. Among the Babiito, the young would also touch the elder’s forehead and chin with their right hand fingers. After the greeting, coffee berries specially kept for visitors would be brought and presented in a small basket for chewing. Hereafter, a tobacco pipe would be offered with tobacco for smoking. The King was not greeted in the same way as ordinary people were greeted. whenever he was in his residence, the King would sit in an advertised place for certain specified hours so that any of his subjects could go and see him. This practice of going to see the King was called okurata. Whenever the people went to see the King, they followed certain procedures and used a different language addressing him. There were more than twenty different ways of addressing the King at different times of the day. The King was not expected to reply to these greetings verbally, and he did not. Normally, in addressing the King, the third person singular was used. In fact nearly all verbs and nouns used to address the King were different from those that were used to address common men. However, women could kneel down and greet the King in the normal way and he would answer their greetings verbally.

The Monarchs Of The Ashanti Kingdom Till Date 190