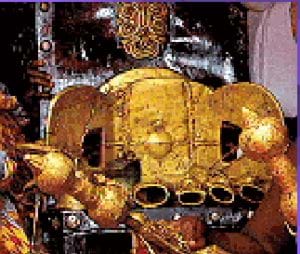 Synonymous with the Ashanti is the legend of the 'Golden Stool' (sika 'dwa), the legend actually tells of the birth of the Ashanti kingdom itself. In the seventeenth century in order for the Ashanti to win their independence from Denkyira, then another powerful Akan state, a meeting of all the clan heads of each of the Ashanti settlements was called, in this meeting the Golden Stool was commanded down from the heavens by Okomfo Anokye, the fetish Priest, or sage, to the very first Asantehene (Ashanti king); Osei Tutu I, the Golden stool floated down, from the heavens straight into the lap of Osei Tutu I. Okomfo Anokye declared the stool to be the symbol of the new Ashanti union ('Asanteman') allegiance was sworn to the Golden Stool and to Osei Tutu as the Asantehene, the newly founded Ashanti union went to war with Denkyira, defeating them in the process. The Golden Stool is sacred to the Ashanti, it is believed that the Golden Stool contains the 'Sunsum' — spirit or soul of the Ashanti people. Just as man cannot not live without a soul, so the Ashanti would cease to exist if the Golden Stool were to be taken from them. The Golden stool is not just sacred, it is a symbol of nationhood, a symbol that binds or unifies all Ashanti. In 1900 an attempt by the British Gold Coast governor-general, Frederick Hodgson, to capture the Golden Stool, led to an uprising, spearheaded by Yaa Asantewaa, which took several months to put down

The Monarchs Of The Ashanti Kingdom Till Date 185