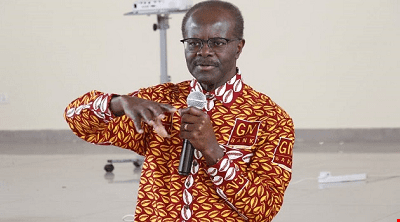 
The Chairman of insolvent GN Savings and Loans, Dr Papa Kwesi Nduom, says his company would have been “highly liquid” if the Ministry of Finance and other government agencies had paid amounts owed to it.

The BoG on Friday (August, 16, 2019) revoked the licences of GN Savings and Loans and 22 other insolvent savings and loans companies and finance house companies.

According to the BoG, GN Savings and Loans, despite its reclassification from a universal bank to a savings and loans company in January this year, the company was unable to resolve its liquidity crisis.

But Dr Nduom in a statement said “the statements regarding GN Savings are wildly inaccurate.”

“Given the detailed information provided to the BoG nearly a year ago, these statements are inconsistent with our discussions with both the BoG and the Ministry of Finance (MoF). We are aware that the MoF has previously confirmed that balances due to GN Savings and other related parties are far in excess of the amounts quoted in the communication from the BoG,” Dr Nduom said in a statement issued a few hours after the BoG’s announcement through a press statement.

“Our position is that GN Savings is not only solvent, ?but would be highly liquid if the MoF simply ordered itself and other government agencies to quickly pay amounts owed to GN Savings and other related entities?. We expect this matter to be resolved in due course,” Dr Nduom added.

He noted further that the company and its stakeholders would give a detailed response to the BoG’s decision.

“In the meantime, we pray that all customers and stakeholders remain calm while we work through this matter with the relevant parties,” he said.

Touching on one of the reasons given by the BoG on why it revoked GN's licence, Dr Nduom stated that "the information about International Business Solutions is false."

He argued that International Business Solutions has two main business lines. "Management Consulting and Import/Export. All of the funds mentioned are comprised of payments of invoices for goods and services that were rendered in Ghana."

"To use it as justification for any regulatory action is either gross negligence on the part of the BoG, or a egregious misrepresentation of the truth designed to drag our name in the mud."

"The BoG has all the documents for every pesewa transferred out of Ghana and there was absolutely nothing wrong with engaging in an international business. The real scandal is the GHc 2.2 Billion Cedi portfolio that the Ministry of Finance has held hostage for over two years. Their refusal to acknowledge and pay these debts has collapsed a strong Ghanaian company," he added.

On 4th January 2019, the Bank of Ghana approved a request to reclassify GN Bank from a universal bank to a Savings and Loans company following its inability to meet new required minimum paid-up capital of GH¢ 400 million by 31st December 2018. The reclassification was to among other things enable the institution to downsize its operations and also inject additional capital to resolve the acute liquidity challenges it was confronted with. The Bank of Ghana subsequently appointed an Advisor to GN to assist in the reclassification process.

The Bank of Ghana has reached the conclusion that GN is currently insolvent under section 123 (4) of the Banks and SDIs Act, 2016 (Act 930), being in breach of its key prudential regulatory requirements. Its Capital Adequacy Ratio (CAR) is currently -61%, in breach of the minimum required of 13%. It is also facing a severe liquidity crisis with numerous complaints received by the Financial Stability Department of the Bank of Ghana from aggrieved customers who have been unable to access their deposits with the institution for the last several months. What is more, it has consistently failed to meet the minimum cash reserve requirement of 10% of its total deposits, since the end of the first quarter of 2019.

GN’s shareholders have failed to restore the bank to the required regulatory capital and liquidity levels in spite of long-standing promises that new capital was expected from foreign investors.

While GN has indicated that government owes it a total amount of GH¢942.98 million of which GH¢102.73 million represented Interim Payment Certificates (IPCs), the Bank of Ghana’s assessment is that IPCs totaling GH¢30.33 million only have been confirmed by the Ministry of Finance as at 6th August 2019 as owed to contractors that may be indebted to affiliates of GN. The Bank of Ghana’s supervisory assessment shoeeds that even when the total outstanding IPCs amount of GH¢30.33 millionwas considered, it still did not address GN’s capital deficit of -GH¢683.66 million.

It must be noted that GN’s insolvency problems are largely attributable to overdraft and other facilities it extended to its related parties who are other companies in the Groupe Ndoum network of businesses, under circumstances that violated relevant prudential norms. Of particular interest are the funds totalling GH¢761.55 million that GN Bank as it then was, placed with its sister companies Ghana Growth Fund (Gold Coast Advisors) and Gold Coast Fund Management Limited (now Blackshield Capital Management), both licensed by the Securities and Exchange Commission. Some of these funds were used by the two related parties to pay their customers whose investments with them had matured, while some were also used to fund road and other contractors, who claim to have worked on Government projects. It is important to note that the IPCs claimed by GN are not supported by transactions that were entered into directly by GN and such contractors or Government and its entities. They reflect transactions entered into by Ghana Growth Fund or Gold Coast Fund Management with these contractors using funds taken from GN under circumstances that violated prudential norms. The failure of the two related parties to pay back these funds to GN affected GN’s capital position, leading eventually to its insolvency and acute liquidity challenges.

In addition to GN’s insolvency and liquidity challenges, the Bank of Ghana has found other key regulatory violations such as the following:

The institution’s adjusted Net worth of negative GH¢30.70 million as at end May 2019 indicates that its paid up capital is impaired in violation of Section 28(1) Act 930.

Contrary to section 64 (2) of the Banks and Specialised Deposit-Taking Institutions Act, 2016 (Act 930), the institution’s exposure to its related party has consistently been above the regulatory limit of 25% of net own funds (NOF). Exposures to other affiliates companies were mainly payments made by the bank on behalf of such affiliates.

The structure of GN’s balance sheet clearly shows that the bank mobilizes deposits for its related companies. The inability of these related companies to honour their obligation to GN has resulted in serious liquidity challenges and contributed to their insolvency as all related party exposures are non-performing. The institution’s high non-performing loans (NPL) was mainly attributed to these related party exposures, which were never paid, thereby putting the deposits of its customer at risk.

A recent Bank of Ghana investigation conducted at GN revealed that a significant amount (USD62,255,516.93, GBP718,528.59 and EUR4,200) of depositors’ funds held with GN had been transferred to International Business Solutions (another company owned by Groupe Nduom and which is based in the U.S.A) without any documentation to support such transfers in breach of section 19 of the Foreign Exchange Act 2006, Act 723, Section IV of Bank of Ghana Notice No. BG/GOV/SEC/2007/4, and subsequent Bank of Ghana Notices issued in August 2014 prohibiting such practices.

The company is yet to publish its 2018 audited accounts contrary to section 90 (2) of the Banks and Specialised Deposit-Taking Institutions Act, 2016 (Act 930). Furthermore, the company did not keep accounting records in a manner that gives an accurate and reliable account of the transactions of the company, and did not therefore show a true and fair view of its operations.

GN has suspended operations in seventy (70) of its branches including the Head office branch at Asylum Down and Castle Road branch, and temporarily suspended its entire management team without the approval of the Bank of Ghana contrary to section 25 (2) of the Banks and Specialised Deposit-Taking Institutions Act, 2016 (Act 930), mainly as a result of its insolvency and liquidity challenges.