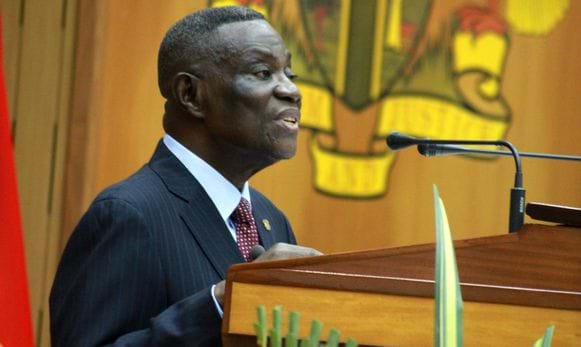 
President John Evans Atta Mills on Thursday said for the first time, Ghana has produced more than one million tonnes of cocoa in 2011, and the country’s output last year, was more than 50 per cent of the produce in 2008 which was 680,000 tonnes. He said in terms of the percentage of the world cocoa price paid to the farmer, Ghana out-performed every Government in the country’s history. Delivering the State of the Nation address in Parliament on Thursday in Accra, President Mills noted that with an average world market price of $2,450 per tonne in January 2012, Government was paying the cocoa farmer about 80 per cent of the world market price. He said Government’s commitment to modernise agriculture, had increased the stock of rice combine harvesters, maize harvesters; additional grain-cocoon storage facilities, and bore holes for agricultural purposes where none existed. President Mills said in addition, Agricultural Mechanization Service Centers, had been established, and as a result of targeted interventions in the agricultural sector, significant increases had been recorded in rice, yam and maize production as well. He said cotton farmers in the Northern Regions could attest to how far Government had gone in reviving the industry, and the intervention had resulted in a sizeable increase in cotton production. On irrigation, President Mills said between 2009 and 2011, Government had rehabilitated several irrigation dams in the three northern regions, Greater Accra, Volta, Ashanti, and Brong Ahafo Regions. With the completion of a master plan for irrigation development, the first phase of the Accra Plains Irrigation Project, covering about 11,000 hectares would begin this year. A new sheanut factory has been established at Buipe in the Northern Region, to process sheanuts for export and the factory was expected to process close to 40,000 tonnes of the produce a year. President Mills announced that Government had already inaugurated the National Steering Committee to formulate programmes and strategies for growing and sustaining the industry. He said the price for purchases at the farm gate has been fixed to ensure that the farmers are not shortchanged. President Mills said Government through the Ghana Cocoa Board had launched a six-year cocoa re-planting programme to rehabilitate old cocoa farms in Ghana. He said the programme entails the production of elite cocoa hybrid seedlings for distribution to farmers free of charge for replanting, The President said the main objective of the programme was to create employment opportunities for the youth in cocoa growing communities, and assist them to acquire the relevant techniques and skills in cocoa production under the Youth in Agriculture Programme In addition, it would encourage under-producing farmers to expand their acreage and increase their yield. President Mills said: “This administration has taken steps to enforce the Fisheries Regulations, and protect fisheries resources. To this end, some patrol vessels have been acquired and will soon be commissioned and implementation of a Fisheries and Aquaculture Development Plan will begin this year”. President Mills announced that a turnkey fish processing plant at Elmina was expected to commence this year. On job creation, he noted that his administration had been concerned about its importance for the growth of the economy and national development. President Mills said the second pillar of the National Democratic Congress manifesto addresses the building of a strong and resilient economy as well as the creation of jobs. He said: “It is on this account that as soon as this Government settled, we organised a special Cabinet Retreat to deal solely with this vital subject. The President said: “It would be recalled that Ministers, as leaders of their sectors, were directed to work with the leadership of the private sector to find innovative ways of creating jobs outside the traditional employment avenues. He said: “I can say with confidence that many jobs have since been created outside the non-traditional areas of employment. Many have also been employed via the traditional employment avenues. “With the expected heavy infrastructure expansion as well as the building of the allied petrochemical industries associated with our oil and gas find, I can safely project that many more jobs will be created by the time the tenure of this Government comes to an end.”